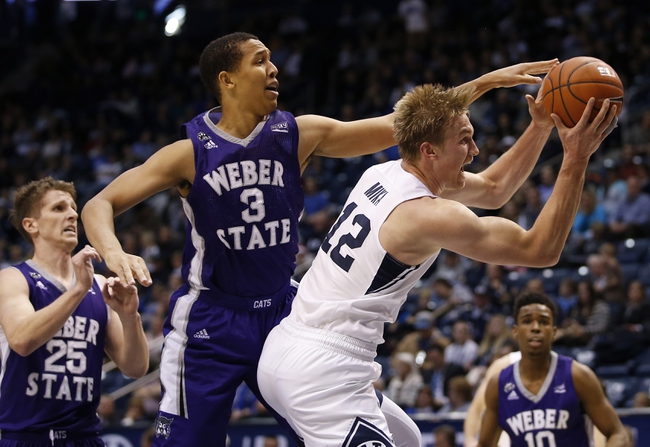 The BYU Cougars will travel to the Dee Events Center to take on the Weber State Wildcats this Saturday night in College Basketball action.

The BYU Cougars lost their 2nd straight game after being defeated by the Illinois State Redbirds, 92-89 in OT, this past Wednesday. BYU allowed Illinois State to fight back from a 11-point 2nd half deficit to force OT and couldn’t pull off the victory after being held scoreless of the final 1:04 of regulation. BYU shot 40.3% from the field and 21.4% from beyond the arc in the loss. Leading the way for the Cougars was Yoeli Childs who had a double-double with 27 points, 16 rebounds, 6 assists, 2 blocks, and a steal.

Defensively, BYU is allowing their opponents to average 72.4 ppg on 39.0% shooting from the field. The Cougars have a rebound margin of 3.6 and a turnover margin of 2.1.

The Weber State Wildcats improved to 4-2 on the season after defeating the NAIA Benedictine (AZ) Redhawks, 100-61, this past Tuesday. Weber State made quick work of the Redhawks and had no trouble securing the victory after taking a 45-25 halftime lead. Weber State shot 52.9% from the field and 51.9% from beyond the arc in the victory. Leading the way for the Wildcats was Brekkott Chapman who had 18 points, 5 rebounds, 4 assits, 3 blocks, and a steal.

Defensively, Weber State is allowing their opponents to average 69.7 ppg on 39.5% shooting from the field. The Wildcats have a rebound margin of 3.5 and a turnover margin of -1.0.

This should be a decent matchup as both teams have solid experience and talent that will make them two of the tougher teams in their respective conferences. BYU is a solid offensive team as they rank T-53rd in scoring offense, however, their three-point shooting has been less than stellar and was a big reason why they couldn’t hold on for a victory at Illinois State. Weber State is also a team that can score the basketball as they rank 23rd in scoring offense and T-21st in FG%. BYU is the better team, but I don’t think there is that big of a gap between these two teams and as I think the Wildcats Jerrick Harding will be able to keep this one close, I’m taking Weber State and the points.