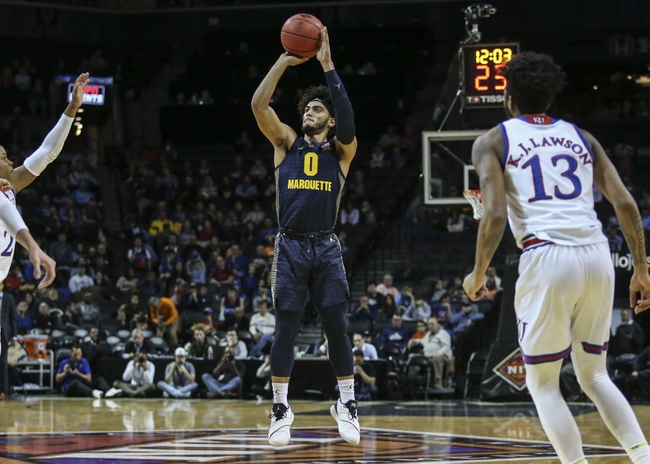 The UTEP Miners will travel to Fiserv Forum to take on the Marquette Golden Eagles this Tuesday night in College Basketball action.

The UTEP Miners snapped their 2-game losing streak and improved to 3-4 on the season after defeating the Northwestern State Demons, 77-47, this past Saturday.  UTEP was outstanding on the defensive end against Northwestern State and had no trouble securing the victory after entering halftime with a 37-20 lead. UTEP held Northwestern State to 34.8% from the field and 17.6% from beyond the arc in the victory. Leading the way for the Miners was Jordan Lathon who had 16 points, 9 rebounds, 3 assists, 2 steals, and a block.

Defensively, UTEP is allowing their opponents to average 70.0 ppg on 41.4% shooting from the field. The Miners have a rebound margin of 3.4 and a turnover margin of -4.0.

The Marquette Golden Eagles wo their 3rd straight game and improved to 6-2 on the season after defeating the 12th ranked Kansas State Wildcats, 83-71, this past Saturday. Marquette had incredible success against the tough Kansas State defense and pulled away after taking a 71-58 lead with 5:59 left in regulation. Marquette shot 56.8% from the field and outrebounded Kansas State by a 34-25 margin in the victory. Leading the way for the Wildcats was Markus Howard who had 45 points, 2 rebounds, 1 assist, and a steal.

Defensively, Marquette is holding their opponents to an average of 66.1 ppg on 38.6% shooting from the field. The Golden Eagles have a rebound margin of 6.3 and a turnover margin of -3.4.

UTEP finished last season with just an 11-20 overall record and it looks like it could be another long season for the Miners as they currently in rebuilding mode. UTEP has struggled offensively this season as they rank just 292nd in scoring offense and 346th in Free-Throw %. Marquette is posed to have one of their best seasons under Steve Wojciechowski as the Golden Eagles have a great scoring duo in Markus Howard & Sam Hauser and a defense that currently ranks 69th in scoring defense and 43rd in defensive FG%. This is a huge number for the Golden Eagles but as I just don’t see how UTEP will be able to challenge the Marquette on either end of the court, I’m taking Marquette to cover this spread.