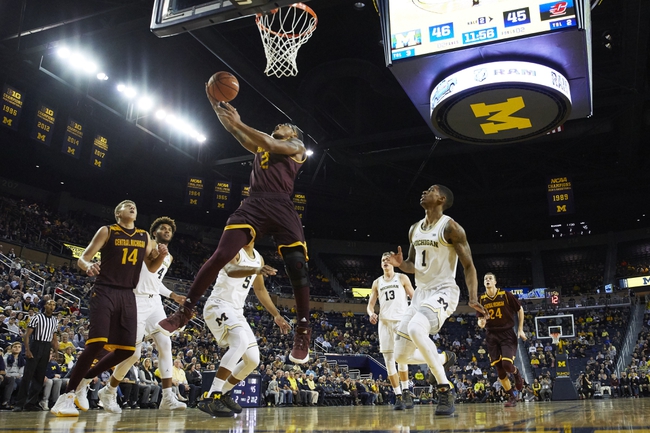 The Central Michigan Chippewas will travel to Beeghly Center to take on the Youngstown State Penguins this Tuesday night in College Basketball action.

The Central Michigan Chippewas had their 3-game winning streak snapped and dropped to 6-2 on the season after being defeated by the TCU Horned Frogs, 89-62, this past Friday. Central Michigan had no answers offensively against TCU and couldn’t fight back after TCU took a 46-26 halftime lead. Central Michigan shot 32.8% from the field and 17.4% from beyond the arc while getting outrebounded by TCU by a 48-31 margin. Leading the way for the Chippewas was Larry Austin Jr. who had 19 points, 5 rebounds, 5 assists, and a steal.

Defensively, Central Michigan is allowing their opponents to average 70.4 ppg on 42.5% shooting from the field. The Chippewas have a rebound margin of 1.9 and a turnover margin of 5.9.

Defensively, Youngstown State is allowing their opponents to average 83.3 ppg on 46.8% shooting from the field. The Penguins have a rebound margin of 4.3 and a turnover margin of -2.8.

Central Michigan ranks 45th in scoring offense and has done a great job forcing turnovers on the defensive end, ranking 10th in steals & 13th in turnover margin. Youngstown State has been decent on the offensive end however, the Penguins once again look like they will struggle on the defensive end as they come into this matchup ranked 336th in scoring defense & 308th in defensive FG%. Central Michigan isn’t as good as their record might indicate, however, I do think the Chippewas have enough offense to be able to do enough to cover this mid-range road spread.