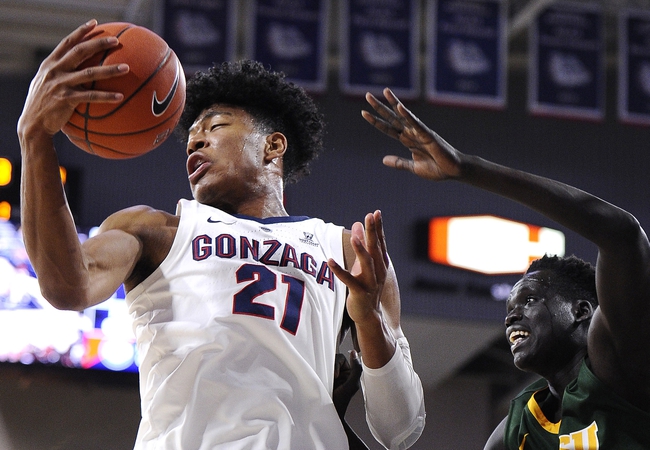 The Washington Huskies will travel to the McCarthey Athletic Center to take on the top-ranked Gonzaga Bulldogs this Wednesday night in College Basketball action.

The Washington Huskies won their 2nd straight game and improved to 6-2 on the season after defeating the UC Santa Barbara Gauchos, 67-63, this past Sunday. Washington held a lead for the majority of the game, however, didn’t pull away for the victory until two Jaylen Nowell FT’s gave the Huskies a two-possession lead with just 7 seconds left in regulation.  Washington shot 42.0% from the field and forced 17 UC Santa Barbara turnovers in the victory. Leading the way for the Huskies was Noah Dickerson who had 22 points, 8 rebounds, 2 blocks, and a steal.

Defensively, Washington is holding their opponents to an average of 66.4 ppg on 39.8% shooting from the field. The Huskies have a rebound margin of 0.3 and a turnover margin of 1.5.

The top-ranked Gonzaga Bulldogs continued their early season dominance and improved to 8-0 on the season after an impressive 103-92 road victory over the Creighton Blue Jays this past Saturday. Gonzaga went into halftime trailing by a 48-41 margin, however, had their way offensively in the 2nd half against the Blue Jays and pulled away after taking a 90-78 lead with 3:44 left in regulation. Gonzaga shot 52.2% from the field and outrebounded Creighton by a 41-33 margin in the victory.

Defensively, Gonzaga is allowing their opponents to average 76.0 ppg on 41.2% shooting from the field. The Bulldogs have a rebound margin of 7.1 and a turnover margin of 1.5.