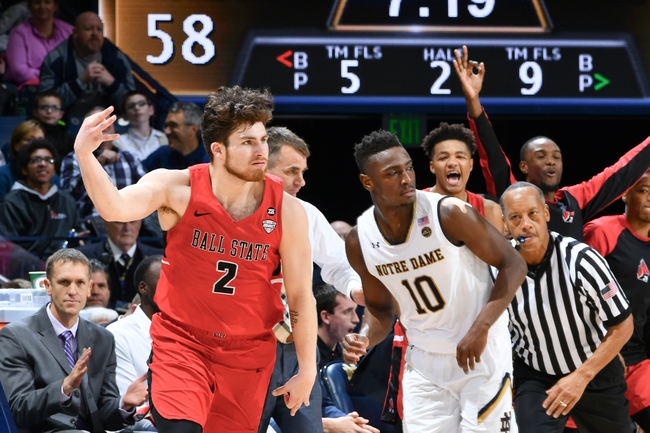 The Ball State Cardinals will travel to the Josepha J. Gentile Center to take on the Loyola-Chicago Ramblers this Wednesday night in College Basketball action.

The Ball State Cardinals won their 4th straight game and improved to 5-3 on the season after defeating the IUPUI Jaguars, 85-75, this past Saturday. Ball State had no trouble generating offense agianst the IUPUI defense and led throughout the entire 2nd half in the victory. Ball State shot 56.0% from the field and 44.4% from beyond the arc in the victory. Leading the way for the Cardinals was Tahjai Teague who had 19 points, 9 rebounds, 1 assist, 1 block, and 3 steals.

Defensively, Ball State is allowing their opponents to average 75.0 ppg on 43.4% shooting from the field. The Cardinals have a rebound margin of 5.0 and a turnover margin of -2.0.

The Loyola-Chicago Ramblers snapped their 2-game losing streak and improved to 5-3 on the season after defeating the UIC Flames, 73-64, this past Saturday. Loyola-Chicago was able to gain control of this game early with an early 10-0 run and had no trouble securing the victory after entering halftime with a 37-28 lead. Loyola-Chicago shot 56.9% from the field while holding UIC to just 40.3% shooting from the field and 21.7% shooting from beyond the arc. Leading the way for the Ramblers was Clayton Custer who had 16 points, 6 rebounds, 5 assists, and a steal.

Defensively, Loyola-Chicago is holding their opponents to an average of 64.8 ppg on 42.3% shooting from the field. The Ramblers have a rebound margin of 1.0 and a turnover margin of -0.4.

Loyola-Chicago is the more well-known team after their run to the Final Four last season, however, it’s important not to sleep on Ball State as they are an experienced team with enough talent with Tayler Persons, K.J. Walton, and Trey Moses to give anyone a game. This game will basically come down to whether the Ball State offense that ranks T-56th in scoring offense & 27th in FG% can put up points on the road against the Ramblers defense that ranks T-52nd in scoring defense. Loyola-Chicago is still a really good team, however, I think this line is a bit inflated due to their popularity with the public and as Ball State has the experience to handle a tough road environment, I’m taking the Cardinals and the points in this one.