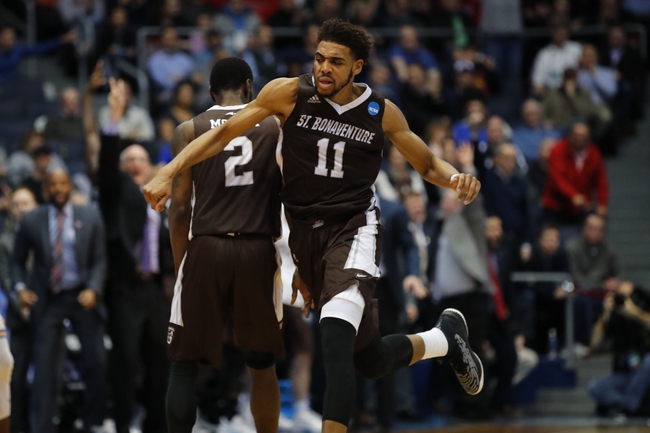 The Siena Saints will travel to the Reilly Center to take on the St. Bonaventure Bonnies this Wednesday night in College Basketball action.

The Siena Saints snapped their 4-game losing streak and improved to 3-5 on the season after defeating the Harvard Crimson, 67-64, this past Saturday. Siena was able to take advantage of a Harvard team missing a couple of their best players and held off a late Crimson charge after taking a 62-52 lead with just 2:58 left in regulation. Siena shot 44.6% from the field and won the turnover battle by a 15-9 margin in the victory. Leading the way for the Saints was Jalen Pickett who had 14 points, 4 rebounds, 8 assists, and 2 steals.

Defensively, Siena is allowing their opponents to average 71.9 ppg on 49.8% shooting from the field. The Saints have a rebound margin of -2.1 and a turnover margin of 0.8.

The St. Bonaventure Bonnies won their 2nd straight game and improved to 3-5 on the season after defeating the Delaware State Hornets, 90-61, this past Saturday afternoon. St. Bonaventure dominated Delaware State on both ends of the court and had no trouble securing the victory after taking a 40-21 halftime lead. St. Bonaventure shot 56.7% from the field and 48.0% from beyond the arc while holding the Hornets to just 33.9% shooting from the field. Leading the way for the Bonnies was Jalen Poyser who had 20 points, 4 rebounds, 8 assists, and 3 steals.

Defensively, St. Bonaventure is holding their opponents to an average of 66.0 ppg on 40.3% shooting from the field. The Bonnies have a rebound margin of -1.8 and a turnover margin of 1.8.

St. Bonaventure no longer have Jalen Adams or Matt Mobley to rely on when it comes to their offense and also suffered a tough injury to LaDarien Griffin who is out until mid-December. Although scoring has been tough to come by for the Bonnies, their defense has helped keep them somewhat competitive as they come into this matchup ranked T-66th in scoring defense, T-49th in blocks per game, and 79th in defensive FG%. Siena picked up a nice win over Harvard however this is also a team that has experience a bunch of roster turnover and can also really struggle to score as they rank just 302nd in scoring offense. Siena might be without their 2nd leading scorer in Eric Fisher who is currently questionable due to an injury and as I just don’t see the Siena offense being able to put up many points on the road agianst the Bonnies defense, I think St. Bonaventure does enough on the offensive end in this one to cover this mid-range spread.