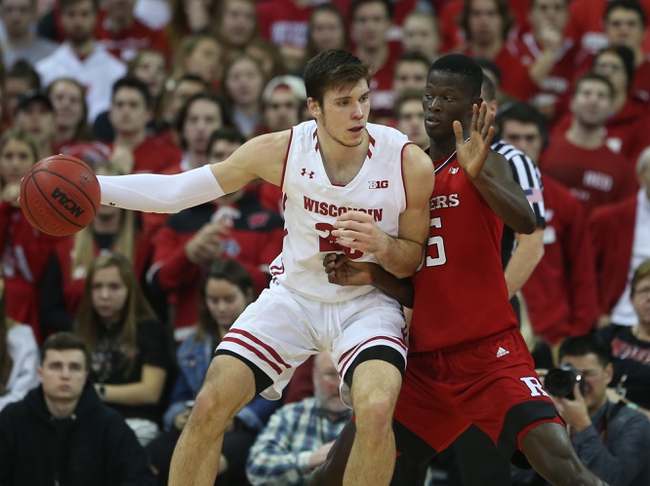 The 12th ranked Wisconsin Badgers will travel to Fiserv Forum to take on the Marquette Golden Eagles this Saturday night in College Basketball action.

The 12th ranked Wisconsin Badgers won their 3rd straight game and improved to 8-1 (2-0 Big 10) on the season after defeating the Rutgers Scarlet Knights, 69-64, this past Monday night. Wisconsin trailed by a 31-26 margin at halftime however, the offensive found it’s rhythm in the 2nd half and was able to secure the victory after taking a 57-46 lead with 4:52 left in regulation. Wisconsin shot 53.7% from the field and committed just 6 turnovers in the victory. Leading the way for the Badgers was Ethan Happ who had 20 points, 4 rebounds, 3 assists, and a steal.

Defensively, Wisconsin is holding their opponents to an average of 61.3 ppg on 40.4% shooting from the field. The Badgers have a rebound margin of 1.3 and a turnover margin of 2.4.

The Marquette Golden Eagles won their 4th straight game and improved to 7-2 on the season after defeating the UTEP Miners, 76-69, this past Tuesday. Marquette allowed UTEP to fight back from a 17-point deficit to make it a 63-58 game with 5:46 left in regulation, however, an ensuing 6-0 run by the Golden Eagles allowed Marquette to pull away for the victory. Marquette shot 49.2% from the field and outrebounded UTEP by a 40-33 margin in the victory. Leading the way for the Golden Eagles was Markus Howard who had 21 points, 3 rebounds, 5 assists, and a steal.

Defensively, Marquette is holding their opponents to an average 66.4 ppg on 39.0% shooting from the field. The Golden Eagles have a rebound margin of 6.3 and a turnover margin of -2.8.

Wisconsin is a solid team that really can get at you on the defensive end and already has quality wins this season agianst Xavier, Oklahoma, NC State, and Iowa. Marquette has one of the best duos in the Big East this season with Markus Howard & Sam Hauser and has been a much improved team on the defensive end this season as they currently rank 74th in scoring defense and 46th in defensive FG%. Marquette has their best team in my opinion under Steve Wojciechowski however, Wisconsin has already showed they can win on the road against good teams as this game is a pick-em, I’m rolling with the Badgers.