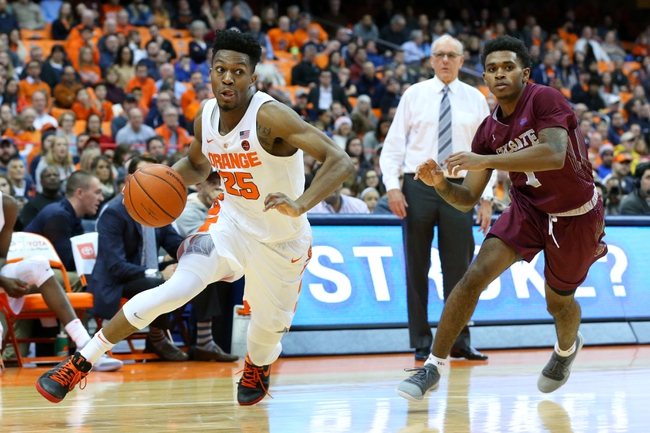 The Georgetown Hoyas will travel to the Carrier Dome to take on the Syracuse Orange this Saturday night in College Basketball action.

The Georgetown Hoyas won their 4th straight game and improved to 7-1 on the season after defeating the Liberty Flames this past Monday night. Georgetown went into halftime with just a 40-38 lead however, the Hoyas were able to pull early in the 2nd half after a 31-10 run to start the 2nd half gave Georgetown a 71-48 lead with 9:39 left in regulation. Georgetown shot 52.7% from the field and 61.1% from beyond the arc in the victory. Leading the way for the Hoyas was Jessie Govan who had a double-double with 17 points, 10 rebounds, 1 assist, and a block.

Defensively, Georgetown is allowing their opponents to average 74.3 ppg on 43.1% shooting from the field. The Hoyas have a rebound margin of 5.6 and a turnover margin of -1.1.

The Syracuse Orange won their 4th straight game and improved to 6-2 on the season after defeating the Northeastern Huskies, 72-49, this past Tuesday. Syracuse had little trouble agianst a Northeastern team missing a few of their better players and easily pulled away after taking a 59-37 lead with 7:15 left in regulation. The Orange held Northeastern to just 34.0% shooting from the field and outrebounded the Huskies by a 43-29 margin in the victory. Leading the way for the Orange was Oshae Brissett who had a double-double with 21 points, 14 rebounds, 2 assists, and a block.

Defensively, Syracuse is holding their opponents to an average of 61.1 ppg on 38.4% shooting from the field. The Orange have a rebound margin of 4.1 and a turnover margin of 3.8.

Georgetown has gotten off to a nice start to their season, led by an offense that ranks T-81st in scoring offense & 89th in FG%, however, I think it’s still to early to really know what this Georgetown team is capable of as they really haven’t played the strongest of competition early this season. Syracuse is looking more like the top-25 team we expected as of late as after dropping back to back games to UConn and Oregon, the Orange has been on a roll which includes an impressive double-digit victory on the road against Ohio State. Syracuse can be a bit inconsistent on the offensive end, however, I think they will be able to put up some points on Georgetown’s 241st ranked scoring defense and as I love how the Syracuse defense is looking as of late, I think they do enough on their home court to cover this double-digit spread.