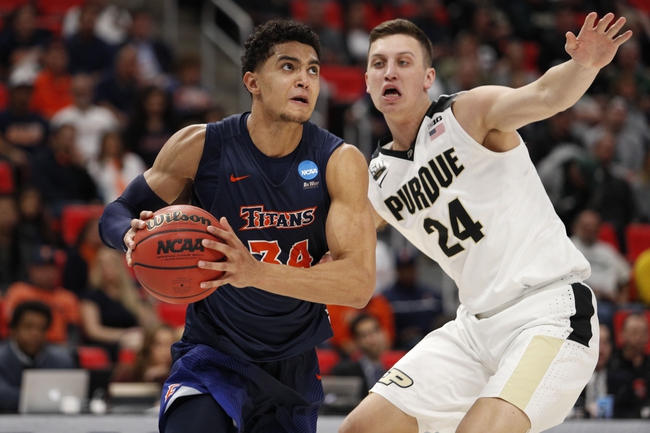 The Ohio Bobcats will travel to Calihan Hall to take on the Detroit Mercy Titans this Saturday afternoon in College Basketball action.

The Ohio Bobcats improved to 6-3 on the season after defeating the Radford Highlanders, 78-69, this past Saturday. Ohio never trailed in the victory and was able to pull late after a Doug Taylor dunk gave the Bobcats a double-digit lead with just 1:27 left in regulation. Ohio shot 50.9% from the field and outrebounded Radford by a 39-31 margin in the victory. Leading the way for the Bobcats was Teyvion Kirk who had 17 points, 6 rebounds, 3 assists, 2 steals, and a block.

Defensively, Ohio is allowing their opponents to average 72.7 ppg on 43.0% shooting from the field. The Bobcats have a rebound margin of 8.4 and a turnover margin of -0.7.

The Detroit Mercy Titans lost their 4th consecutive game and dropped to 3-7 on the season after being defeated by the Toledo Rockets, 101-57, on December 5th. It was a tough spot for the Titans who were playing the 2nd half of back to back road games and Detroit couldn’t fight back after the Rockets took a commanding 49-27 lead at halftime. Detroit Mercy allowed Toledo to shoot 51.6% from the field and was outrebounded by the Rockets by a 54-29 margin in the loss. Leading the way for the Titans was Antoine Davis who had 19 points, 6 rebounds, and 4 assists.

Defensively, Detroit Mercy is allowing their opponents to average 80.6 ppg on 45.7% shooting from the field. The Titans have a rebound margin of -10.9 and a turnover margin of 2.3.

There is no question that Ohio is the better team here and should have a huge advantage on the boards, however, the Bobcats have looked awful away from home this season as they are 0-3 away from home and have lost by an average of 22.3 ppg (vs. South Fla., Loyola Marymount, Xavier). Detroit is a team that plays little defense however, has been solid from beyond the arc this season as they rank 15th in three-pointers made per game and 49th in 3P-FG%., Detroit has been competitive at home this season and as I think the public will drive the lineup in the other direction based of the Titans recent blowout losses, I’m taking Detroit Mercy and the points in this one.