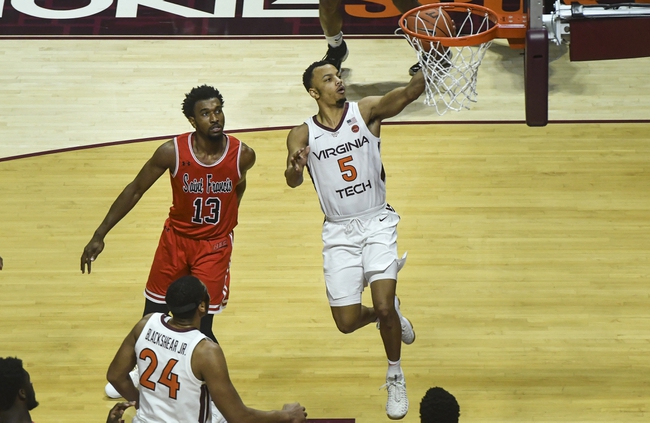 The 13th ranked Virginia Tech Hokies and Washington Huskies will face off in the Air Force Reserve Basketball Hall of Fame Boardwalk Classic at Boardwalk Hall this Saturday night.

The 13th ranked Virginia Tech Hokies won their 3rd straight game and improved to 8-1 on the season after defeating the South Carolina State Bulldogs, 81-44, this past Sunday. Virginia Tech was outstanding on the defensive end against the Bulldogs and had no trouble pulling away in the 2nd half after taking a 34-23 halftime lead. Virginia Tech shot 48.3% from the field while holding South Carolina State to just 34.0% shooting from the field and 7.7% from beyond the arc. Leading the way for the Hokies was Kerry Blackshear Jr. who has a double-double with 12 points, 13 rebounds, 5 assits, 1 block, and a steal.

Defensively, Virginia Tech is holding their opponents to an average of 57.6 ppg on 39.5% shooting from the field. The Hokies have a rebound margin of 3.2 and a turnover margin of 5.9.

The Washington Huskies improved to 7-3 on the season after defeating the Seattle Redhawks, 70-62, this past Sunday night. Washington held a comfortable 20-point lead midway through the 2nd half however, struggled offensively down the stretch and had to hang on for the victory after Seattle pulled within 2-points of tying the game with just over two minutes left in regulation. Washington shot 47.3% from the field and outrebounded Seattle by a 40-29 margin in the victory. Leading the way for the Huskies was Jaylen Nowell who had 18 points, 9 rebounds, 3 assists, and a block.

Defensively, Washington is holding their opponents to an average of 67.4 ppg on 39.6% shooting from the field. The Huskies have a rebound margin of 0.5 and a turnover margin of 0.7.

Virginia Tech is going to be a very tough team in the ACC this year as they have great depth and can beat you on both ends of the court as they currently rank 48th in scoring offense, 3rd in 3P-FG%, and 7th in scoring defense. Washington is also a solid team that should have success this season, especially after almost upsetting Gonzaga on the road recently, however, they can struggle on the offensive end at times like we saw in their recent game agianst Seattle and come into this matchup ranked just T-237th in scoring offense. I would be tempted to take Washington if they were playing at home however, as I think the Virginia Tech defense will give the Huskies trouble, I’m taking the Hokies to cover this spread.