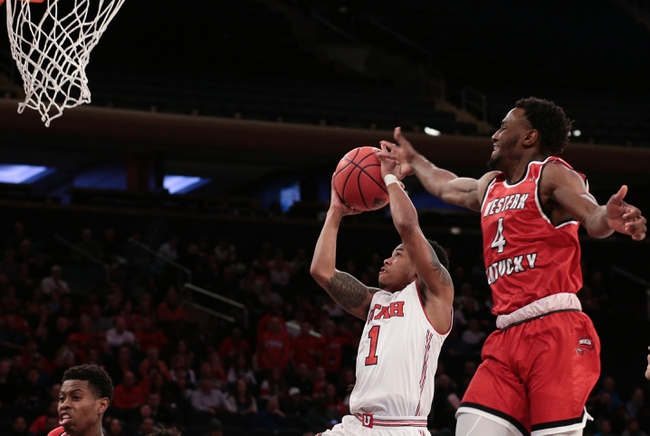 The Western Kentucky Hilltoppers and the Belmont Bruins meet in college basketball action from the Curb Event Center on Wednesday night.

The Western Kentucky Hilltoppers come into this game looking to rebound after an 87-81 loss to Troy as a 10-point favorite in their last outing. Jared Savage led the Hilltoppers with 23 points on 7 of 12 shooting with 3 threes and 7 rebounds while Charles Bassey added 18 points and 9 rebounds. Lamonte Bearden added 12 points with a team-high 5 assists and 3 steals while Taveion Hollingsworth and Josh Anderson each had 10 points to round out the scoring in double figures for WKU in the losing effort, with Hollingsworth adding 12 rebounds for the double-double. Hollingsworth leads Western Kentucky with an average of 16.5 points and 2.7 assists per game while Bassey leads the Hilltoppers on the glass with 9.5 rebounds per game this season. As a team, Western Kentucky is averaging 72.8 points per game on 44.1% shooting from the field, 35.3% from behind the 3-point line and 71.5% from the foul line this season.

The Belmont Bruins come into this game looking to build on back-to-back wins after a 74-72 win over UCLA in their last outing. Kevin McClain led the Bruins with 20 points on 8 of 11 shooting with 3 threes, 6 rebounds and 6 assists while Dylan Windler and Grayson Murphy each had 12 points to round out the trio of double-digit scorers for the Bruins in the win. Windler added 15 rebounds for the double-double while Murphy dished out a team-high 7 assists in the win. Windler leads Belmont with an average of 19.1 points and 8.9 rebounds while Murphy leads the Bruins in assists with 7.1 assists per game this season. As a team, Belmont is averaging the 7th-most points per game in the country with 90.6 points per game on 48.8% shooting from the field, 36.6% from behind the arc and 68.4% from the foul line this season.

I think you could make a case for the points with Western Kentucky on the road as their last 3 road games have either ended in an outright victory, or a loss by single digits. However, the Hilltoppers followed up an outright victory as a double-digit underdog against Arkansas by losing as a double-digit favorite to Troy and simply lost any momentum that the victory provided. Belmont is coming off of an upset win over UCLA and now return home where the Bruins are outscoring teams by 10.6 points per game this season. I’ll lay the reasonable line with Belmont in this spot as the Bruins offense will just be too much.