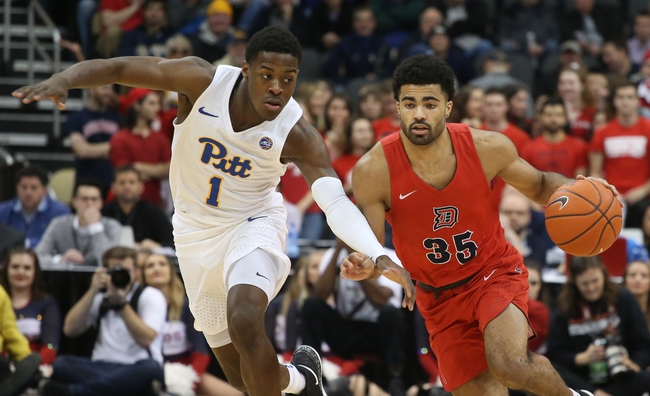 The Penn State Nittany Lions and Duquesne Dukes will face off at PPG Paints Arena this Wednesday night in College Basketball action.

The Penn State Nittany Lions dropped to 5-5 (0-2 Big Ten) on the season after being defeated by the NC State Wolfpacks, 89-78, this past Saturday. Penn State had no answers on the defensive end agianst NC State and couldn’t fight back after a 12-0 Wolfpack run gave NC State an 80-64 lead with 3:31 left in regulation. Penn State shot just 42.2% from the field while allowing NC State to shoot 60.7% from the field and 50.0% from beyond the arc. Leading the way for the Nittany Lions was Rasir Bolton who had 25 points, 3 steals, and an assist.

Defensively, Penn State is holding their opponents to an average of 66.9 ppg on 44.9% shooting from the field. The Nittany Lions have a rebound margin of 1.5 and a turnover margin of 2.3.

The Duquesne Dukes won their 4th straight game and improved to 8-2 on the season after defeating the Maine Black Bears, 72-46, this past Sunday. Duquesne had little trouble taking care of business against Maine and easily cruised to victory after taking a 40-16 halftime lead. Duquesne held Maine to just 36.0% from the field and forced the Black Bears into committing 25 turnovers in the victory. Leading the way for the Dukes was Marcus Weathers who had 13 points, 5 rebounds, 1 assist, and a steal.

Defensively, Duquesne is allowing their opponents to average 69.0 ppg on 43.2% shooting from the field. The Dukes have a rebound margin of 1.0 and a turnover margin of 2.3.

Penn State is a solid defensive team that has picked up a big win over Virginia Tech earlier this season, however, for the Nittany Lions to have success this season, they need to improve on an offense that ranks T-276th in scoring offense and 292nd in FG%. Duquesne is a dangerous team in the A-10 this season as they brought back a bunch of experience and have a balanced team that ranks T-166th in scoring offense and T-114th in scoring defense. Duquesne isn’t a team that Penn State should take lightly as the Dukes already have solid victories over Radford & Marshall and as I think the Dukes defense will keep this game close, I’m taking Duquesne and the points.