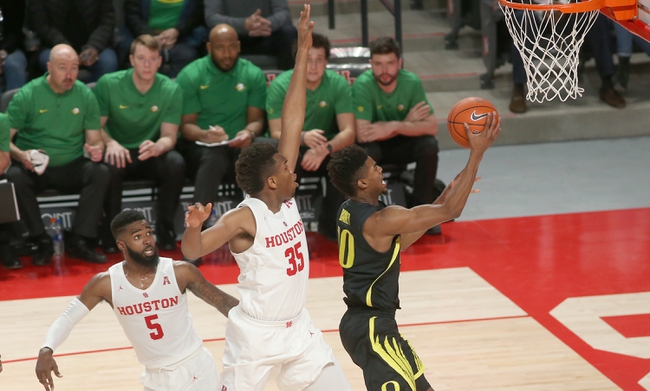 The Utah State Aggies and the Houston Cougars meet in college basketball action from the Fertitta Center on Thursday night.

The Utah State Aggies come into this game looking to add to their 9-2 mark on the year after an 86-48 win over Alabama State in their last outing. Sam Merrill led the Aggies with 16 points along with 5 assists and 3 steals while Neemias Queta came right behind with 15 points on a perfect 5 of 5 from the floor along with 7 rebounds, a pair of steals and 4 blocks. Dwayne Brown Jr. added 14 points and 7 rebounds while Crew Ainge added 11 points and Diogo Brito contributed 10 points to finish off the scoring in double figures for Utah State in the win, while Quinn Taylor added 9 points and 9 rebounds in the victory. Merrill leads Utah State with an average of 20.2 points and 4 assists per game while Queta leads the Aggies on the glass with 8.4 rebounds per game this season. As a team, Utah State is averaging 84 points per game on 49.4% shooting from the field, 35.8% from behind the arc and 77.1% from the foul line this season. The Aggies are also tough defensively, giving up the 6th-lowest field goal percentage against, allowing opponents to shoot just 36.5% from the field this season.

The Houston Cougars will look to remain unbeaten after improving to 10-0 with a 68-64 win over Saint Louis in their last outing. Corey Davis Jr. led the Cougars with 17 points on 4 of 11 shooting with 3 threes and a 6 of 6 mark from the foul line with 6 rebounds. Armoni Brooks and Galen Robinson Jr. each had 13 points with Robinson Jr. shooting 6 of 10 while adding 3 assists and a pair of steals while Brooks added a team-high 8 rebounds. Dejon Jarreau added 10 points in 14 minutes to round out the scoring in double figures for Houston in the win. Brooks leads Houston with an average of 15.8 points and 7.2 rebounds per game while Robinson Jr. leads the Cougars with an average of 5.9 assists per game this season. As a team, Houston is averaging 75.3 points per game on 44.9% shooting from the field, 34.1% from behind the arc and 70.6% from the foul line this season.

I’ve gone back and forth on this game, as the Aggies have done a good job beating up on teams that they’re supposed to beat, and have been a pleasant surprise this season, but their two losses came against above average competition, and I’d group Houston with or place the Cougars slightly above BYU and Arizona State. Houston also owns a 14-point win over the same BYU Cougars that beat Utah State, and are the more battle tested team with wins over Oklahoma State, Oregon, Saint Louis and LSU. I think that experience helps Houston in this spot as I think the Cougars hit free throws late to narrowly pick up a cover in this one so I’ll lay the points with Houston.