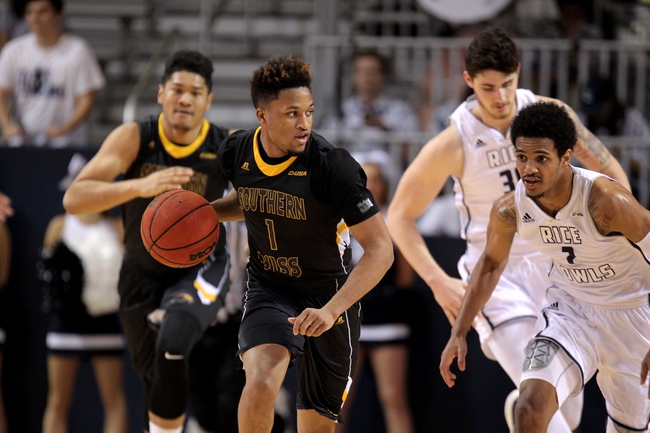 The Southern Mississippi Golden Eagles will travel to the Sanford Coyote Sports Center to take on the South Dakota Coyotes this Friday night in College Basketball action.

The Southern Mississippi Golden Eagles lost their 2nd straight game and dropped to 7-4 on the season after being defeated by the Kansas State Wildcats, 55-51, this past Wednesday night. Southern Mississippi went into halftime with a 31-19 lead however, struggled offensively in the 2nd half and couldn’t fight back after the Wildcats took a 51-44 lead with just 2:18 left in regulation. Southern Mississippi shot just 31.7% from the field and 21.2% from beyond the arc in the loss. Leading the way for the Golden Eagles was Cortez Edwards who had 18 points, 4 rebounds, 3 steals, and a block.

Defensively, Southern Mississippi is holding their opponents to an average of 61.7 ppg on 39.1% shooting from the field. The Golden Eagles have a rebound margin of 1.7 and a turnover margin of 5.1.

The South Dakota Coyotes has their 2-game winning streak snapped and dropped to 6-6 on the season after being defeated by the top-ranked Kansas Jayhawks, 89-53 this past Tuesday night. South Dakota was competitive for much of the 1st half agianst the Jayhawks, however, had no answers defensively for the Kansas offense and couldn’t fight back after falling behind by a 61-47 margin with 8:33 left in regulation. South Dakota allowed Kansas to shoot 51.5% from the field and was outrebounded by the Jayhawks by a 42-31 margin in the loss. Leading the way for the Coyotes was Stanley Umude who had 28 points, 6 rebounds, 4 assists, and 2 blocks.

Defensively, South Dakota is holding their opponents to an average of 64.9 ppg on 43.0% shooting from the field. The Coyotes have a rebound margin of -1.8 and a turnover margin of 2.4.

Southern Mississippi is in the beginning of a brutal 6-game road stretch however, even though they have lost their last two games, you have to be impressed by the Golden Eagles as they had chances to win both games at Wichita State & Kansas State. Southern Mississippi has been led by their defense that ranks 21st in scoring defense, 36th in defensive FG%, and 2nd in turnover margin. South Dakota is a very good team that will once agianst be one of the better teams in the Summit this season and has also been led by their defense that ranks t-49th in scoring defense. South Dakota is tough at home, however, as I think their 324th ranked scoring offense will struggle against the Golden Eagles defense, I’m taking Southern Mississippi and the points in this one.