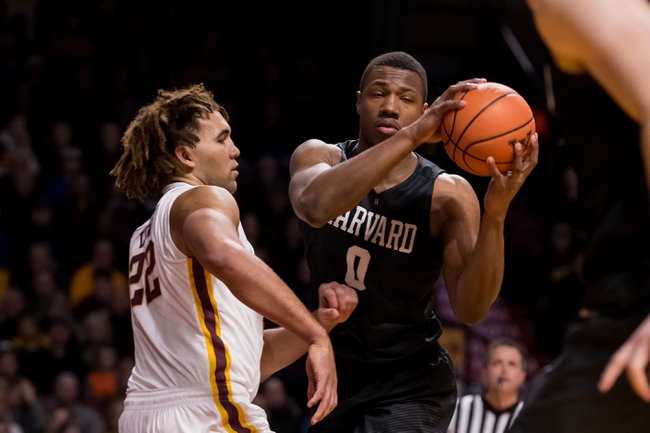 The George Washington Colonials will travel to Lavietes Pavilion to take on the Harvard Crimson this Saturday afternoon in College Basketball action.

Defensively, George Washington is allowing their opponents to average 71.9 ppg on 44.8% shooting from the field. The Colonials have a rebound margin of -5.5 and a turnover margin of -0.3.

The Harvard Crimson lost their 2nd straight game and dropped to 4-5 on the season after being defeated by the Vermont Catamounts, 71-65, on December 8th. Harvard held the lead for the majority of the 2nd half agianst a very good Vermont team however, the defense struggled down the stretch and couldn’t fight back after Vermont took a 66-62 lead with 1:06 left in regulation. Harvard shot 49.0% from the field however, lost the turnover battle by a 21-7 margin in the loss. Leading the way for the Crimson was Corey Johnson who had 17 points, 5 rebounds, 2 blocks, and an assist.

Defensively, Harvard is allowing their opponents to average 69.2 ppg on 42.8% shooting from the field. The Crimson have a rebound margin of 2.9 and a turnover margin of -4.7.

These teams might have similar records, however, there is no denying that Harvard is the better team even if they are still missing their best player in Seth Towns who is out indefinitely with a knee injury. Even without Towns, Harvard has been competitive in games at San Francisco, Saint Mary’s, and Vermont and currently rank 25th in FG% and 123rd in scoring defense. George Washington’s best win this season has come agianst Manhattan and the outlook doesn’t look great for the Colonials who rank 336th in scoring offense, 247th in defensive FG%, and 327th in rebound margin. Harvard might be a bit rusty coming out of the gates considering this is the first game they’ve played in two weeks, however, once the Crimson find their footing, I think they’ll easily pull away from the Colonials and cover this large home spread. Take Harvard to cover.