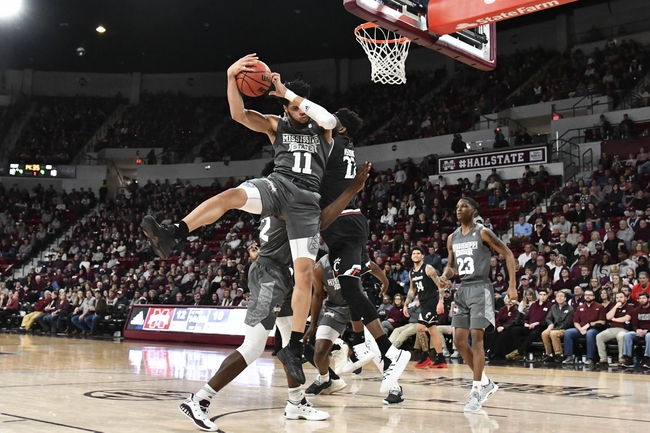 The BYU Cougars and the Mississippi State Bulldogs meet in college basketball action from the Humphrey Coliseum on Saturday afternoon.

The BYU Cougars will look to rebound from back-to-back losses after a 90-81 defeat at the hands of San Diego State in their last outing. TJ Haws led the Cougars with 18 points on 7 of 13 shooting with a team-high 5 assists while Jahshire Hardnett added 12 points on 5 of 12 shooting with a pair of threes. Yoeli Childs and Luke Worthington each had 11 points to round out the foursome of double-digit scorers for BYU in the losing effort with Childs adding a team-high 6 rebounds while Worthington shot 5 of 7 from the floor with 5 boards. Childs leads BYU by averaging a double-double per game with 22.1 points and 10.6 rebounds per game while Haws leads the Cougars with an average of 5.1 assists per game this season. As a team, BYU is averaging 84.8 points per game on 48.1% shooting from the field, 30.8% from behind the arc and 74.1% from the foul line this season.

The Mississippi State Bulldogs will be looking to add to their current 8-game winning streak after a 67-63 win over Wright State in their last outing. Quinndary Weatherspoon led the Bulldogs with 14 points along with 6 rebounds while Aric Holman added 12 points on 5 of 10 shooting with a pair of threes, a team-high 9 rebounds along with 4 steals and 4 blocks. Lamar Peters chipped in 11 points and a team-high 6 assists with 3 steals while Tyson Carter added 10 points to round out the scoring in double figures for the Bulldogs in the winning effort. Quinndary Weatherspoon leads the Bulldogs with an average of 16.4 points per game while Holman leads Mississippi State in rebounding with 8.7 rebounds per game and Peters leads the Bulldogs in assists with 6.2 assists per game this season. As a team, Mississippi State is averaging 78.2 points per game on 47.6% shooting from the field, 38.5% from behind the arc and 74.4% from the foul line this season.

This is a lot of points to lay considering that BYU is scoring 6.6 more points per game than the Bulldogs this season. However, while BYU has had some close calls on the road this season, the fact of the matter is that BYU is still 0-4 ATS away from home this year and have had covering issues on the road dating back to last season. Mississippi State is a serious team to watch in the SEC, and while scraping by Wright State isn’t something to make note of, the Bulldogs have beaten up on some tough opposition already this year, beating the likes of Wofford, Cincinnati and Clemson all by double digits, so I’ll lay the points with Mississippi State here.