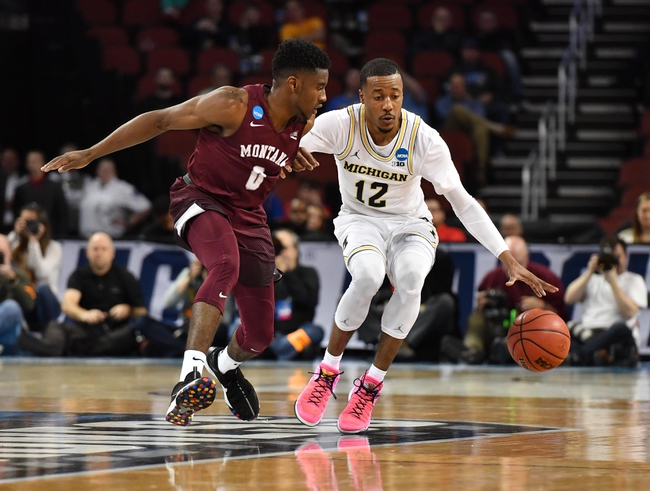 The Montana Grizzlies will travel to the J. Lawrence Walkup Skydome to take on the Northern Arizona Lumberjacks this Saturday afternoon in College Basketball action.

The Montana Grizzlies improved to 7-4 on the season after upsetting the South Dakota State Jackrabbits on the road by an 85-74 margin this past Saturday. Montana was outstanding on the defensive end agianst the high scoring Jackrabbits and was able to pull away for victory after taking an 82-72 lead with 1:14 left in regulation. Montana shot 47.5% from the field while holding South Dakota State to just 45.5% shooting from the field and 31.6% shooting from beyond the arc. Leading the way for the Grizzlies was Michael Oguine who had 23 points, 9 rebounds, and a block.

Defensively, Montana is holding their opponents to an average of 67.6 ppg on 42.7% shooting from the field. The Grizzlies have a rebound margin of -2.0 and a turnover margin of 1.7.

The Northern Arizona Lumberjacks lost their 7th straight game and dropped to 2-8 on the season after being defeated by the Utah Utes, 76-62, on December 21st. Northern Arizona trailed by a 38-30 margin at halftime and couldn’t fight back after an 8-0 Utes run gave Utah a 48-32 lead with 15:45 left in regulation. Northern Arizona allowed Utah to shoot 49.2% from the field and was outrebounded by the Utes by a 38-33 margin in the loss. Leading the way for the Lumberjacks was Brooks DeBisschop who had 16 points, 7 rebounds, 2 assists, and 3 steals.

Defensively, Northern Arizona is allowing their opponents to average 80.6 ppg on 48.6% shooting from the field. The Lumberjacks have a rebound margin of -4.5 and a turnover margin of -2.1.

Montana comes into this game with a 7-4 record, however, make no mistake, the Grizzlies are a talented team that returned the majority of the team that gave Michigan a run for their money in the 1st round of the NCAA Tournament last season. Montana is led by their defense that ranks 93rd in scoring defense and has an efficient offense that ranks 54th in FG%. Northern Arizona is just 2-8 on the season, however, have been great agianst ATS this season as they generally have been seeing a bunch of points. Northern Arizona is going to struggle to picking up many wins this season as they currently rank 326th in scoring defense, 337th in defensive FG%, and 314th in rebound margin. Montana hasn’t been great ATS on the road as of late, however, as they know have Jamar Akoh back in the lineup, I think they follow-up their impressive road victory agianst South Dakota State with a blowout victory that covers the spread agianst the Lumberjacks. Take Montana to cover.