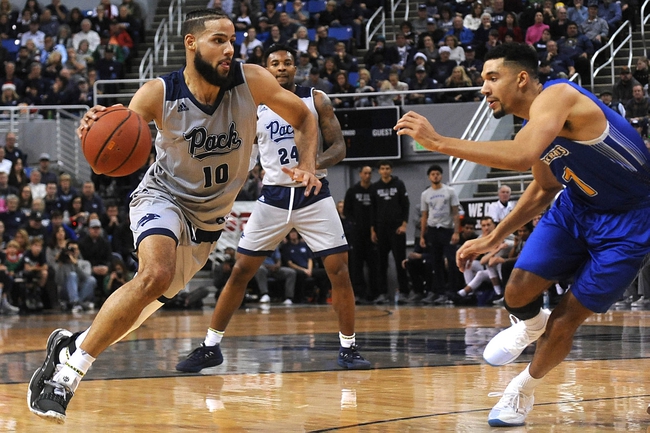 The 6th ranked Nevada Wolf Pack will travel to the Jon M. Huntsman Center to take on the Utah Utes this Saturday afternoon in College Basketball action.

The 6th ranked Nevada Wolf Pack stayed perfect on the season, improving to 12-0 on the year, after defeating the Akron Zips, 68-62, this past Saturday. Nevada struggled offensively against the tough Zips defense, however, was able to pull away for the victory after taking a 59-50 lead with 4:20 left in regulation. Nevada shot 42.0% from the field while holding Akron to just 35.9% shooting from the field and 35.7% from beyond the arc. Leading the way for the Wolf Pack was Caleb Martin who had a double-double with 19 points, 10 rebounds, 1 assist, 3 blocks, and a steal.

Defensively, Nevada is holding their opponents to an average of 67.2 ppg on 40.2% shooting from the field. The Wolf Pack have a rebound margin of 3.3 and a turnover margin of 2.8.

The Utah Utes won their 2nd straight game and improved to 6-5 on the season after defeating the Northern Arizona Lumberjacks, 76-62, on December 21st. Utah led by a 38-30 margin at halftime and was able to pull away for the easy victory after taking a 64-45 lead midway through the 2nd half. Utah shot 49.2% from the field and outrebounded the Lumberjacks by a 38-33 margin in the victory. Leading the way for the Utes was Sedrick Barefield who had 15 points, 6 assists, and 3 steals.

Defensively, Utah is allowing their opponents to average 71.7 ppg on 46.0% shooting from the field. The Utes have around margin of 4.5 and a turnover margin of -2.1.

Nevada has one of the most experienced and talented starting fives in the country, however, the past few games have been closer than expected as the Wolf Pack had just 4-point victories at home vs. South Dakota State & Akron. The Wolf Pack overall have been solid on both ends of the court this season as they currently rank 35th in scoring offense, 80th in scoring defense, and 63rd in defensive FG%. Utah is 5-0 at home this season, however, this is still a team that is nowhere near the talent level of the Utah teams we’ve seen in the past few years. Utah had a bunch of depth, however, they have no one in there starting lineup that is averaging double-digits and currently rank just 198th in scoring offense, 190th in scoring defense, and 288th in defensive FG%. Utah is a tough place to play, however, Nevada top 4 players are better than anyone that Utah has and as I think this line is a little lower due to the recent close games by the Wolf Pack, I think Nevada does enough in this one to cover this spread on the road.