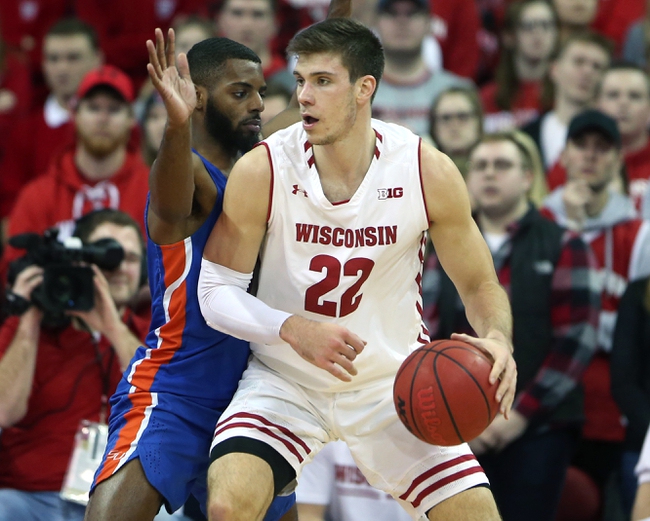 The Wisconsin Badgers and the Western Kentucky Hilltoppers meet in college basketball action from E.A. Diddle Arena on Saturday evening.

The Wisconsin Badgers will look to build on back-to-back wins after an 84-53 win over Grambling State in their last outing. Ethan Happ led the Badgers with 19 points on 6 of 12 shooting with team-highs of 8 rebounds and 5 assists. D’Mitrik Trice came 2ndwith 14 points while Nate Reuvers and Kobe King each had 10 points to finish off the scoring in double figures for Wisconsin in the win. Brad Davison and Brevin Pritzl each had 3 steals as well in the winning effort for Wisconsin. Happ leads the Badgers by averaging a double-double per game with 19.2 points, 10.6 rebounds and 5 assists per game this season. As a team, Wisconsin is averaging 76.5 points per game on 49.4% shooting from the field, 40% from behind the arc and 69.3% from the foul line this season.

The Western Kentucky Hilltoppers will look to build on a 71-68 win over Saint Mary’s in their last outing. Josh Anderson led the Hilltoppers with 18 points on 8 of 11 shooting with a pair of steals while Taveion Hollingsworth added 16 points and Jared Savage chipped in 12 points. Dalano Banton added 11 points with a team-high 6 assists and 3 blocks to finish off the scoring in double figures for WKU in the winning effort. Charles Bassey added 5 points with a team-high 7 rebounds and 3 blocks as well in the victory. Hollingsworth leads the Hilltoppers with 15.4 points and 2.7 assists per game while Bassey leads Western Kentucky on the glass with 9.3 rebounds per game this season. As a team, Western Kentucky is averaging 72.8 points per game on 45.1% shooting from the field, 35% from behind the arc and 72.7% from the foul line this season.

A lot of times I have seriously think about siding with a road favorite, this is not one of those times. Western Kentucky put up a solid win against Saint Mary’s in their last outing and have done well at home for this most part, but Wisconsin has been solid ATS both overall and on the road dating back to last season. I think this is a game that Wisconsin ends up winning by double digits, so I’ll take Wisconsin and lay the points here.