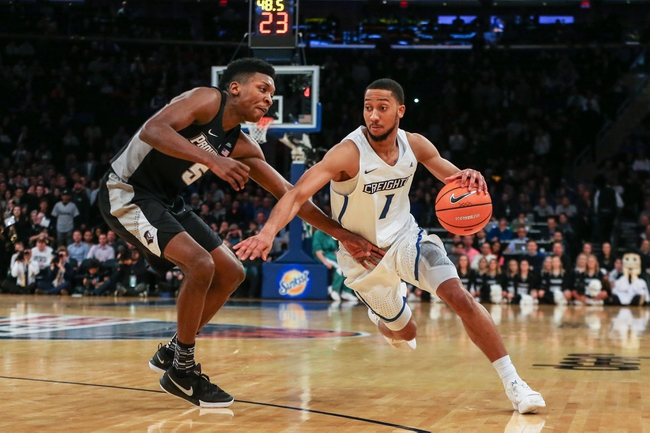 The Creighton Bluejays and the Providence Friars meet in Big East conference college basketball action from the Dunkin Donuts Center on Monday afternoon.

The Creighton Bluejays come into this game looking to build on back-to-back wins after an 89-53 rout of UMKC in their last outing. Ty-Shon Alexander led the Bluejays with 19 points on 7 of 13 shooting with 3 threes while Davion Mintz added 3 triples of his own as part of his 13-point outing and Martin Krampelj added 11 points with a team-high 8 rebounds on 5 of 6 shooting to round out the trio of double-digit scorers for Creighton in the win. Mitch Ballock added 6 rebounds and a team-high 5 assists as well in the victory. Alexander leads the Bluejays in scoring with 17.2 points per game while Ballock leads Creighton in assists with 3.5 assists per game and Damien Jefferson is the Bluejays’ leader on the glass with 5.8 rebounds per game this season. As a team, Creighton is averaging 85.2 points per game with the 4th-best field goal percentage in D-I, shooting 52.5% from the field, and the 3rd-best 3-point percentage in the nation, shooting 44.7% from 3-point range, along with a 62.1% mark from the foul line this season.

The Providence Friars will look to add to their current 3-game winning streak after a 71-65 win over Texas in their last outing. Alpha Diallo led the Friars with 20 points on 5 of 10 shooting along with a 9 of 14 mark from the foul line and 6 rebounds while Isaiah Jackson added 12 points on 5 of 9 shooting with a pair of threes as the only other Providence player to score in double figures in the win. Kalif Young added 4 points, 3 steals and a team-high 8 rebounds while Jimmy Nichols Jr. added 6 points, 6 rebounds and a pair of blocks. Diallo leads the Friars with an average of 17.4 points, 8.5 rebounds and 3.4 assists per game this season. As a team, Providence is averaging 75.2 points per game on 45% shooting from the field, 38.8% from behind the 3-point line and 67.3% from the charity stripe this season.

Providence has had a solid start to the season and with this game being a pick ‘em, siding with the Friars who are 7-1 SU at home this season would be the logical pick. However, something seems off about going against Creighton here. The Bluejays have lost both of their true road games by double-digits, but those losses came to Nebraska and Oklahoma, both of whom are teams I’d put ahead of Providence here. The Friars haven’t played a tough schedule at home this season, while Creighton is the more battle-tested team here, so I’ll side with the better offensive team and in my opinion that’s Creighton.