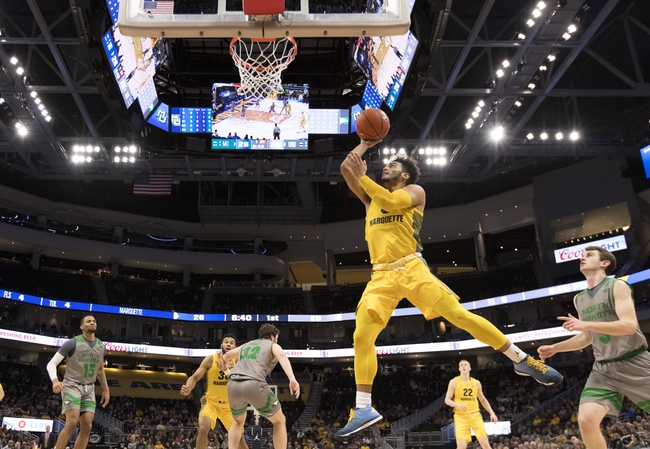 The 16th ranked Marquette Golden Eagles will travel to Carnesecca Arena to take on the St. John’s Red Storm this Tuesday night in College Basketball action.

The 16th ranked Marquette Golden Eagles won their 8th straight game and improved to 11-2 on the season after defeating the Southern Jaguars, 84-41, this past Friday night. Marquette dominated on the defensive end against the Jaguars and had no trouble securing the victory after taking a 48-17 halftime lead. Marquette shot 45.0% from the field while holding Southern to just 25.9% shooting from the field & 12.5% shooting from beyond the arc in the victory. Leading the way for the Golden Eagles was Markus Howard who had 26 points, 1 rebound, and 3 steals.

Defensively, Marquette is holding their opponents to an average of 66.1 ppg on 38.7% shooting from the field. The Golden Eagles have a rebound margin of 9.1 and a turnover margin of -2.3.

The St. John’s Red Storm suffered their first loss of the season, dropping to 12-1 (0-1 Big East) on the season after being defeated by the Seton Hall Pirates, 76-74, this past Saturday. St. John’s held a comfortable 10-point lead for the majority of the game, however, allowed Seton Hall to fight back late to tie the game at 69-all with 3:30 left in regulation and the Pirates were able to secure the dramatic come from behind victory after Shavar Reynolds hit a game-winning three-pointer as time expired. St. John’s shot 43.1% from the field however, was outrebounded by the Pirates by a 46-30 margin in the loss. Leading the way for the Red Storm was Mustapha Heron who had 19 points, 3 rebounds, 3 steals, 1 assist, and a block.

Defensively, St. John’s is allowing their opponents to average 70.4 ppg on 41.3% shooting from the field. The Red Storm have a rebound margin of -1.6 and a turnover margin of 6.0.

This should be an entertaining game as both Marquette & St. John’s look like they’ll be two of the tougher teams in the Big East this season. Marquette has always been decent at scoring the basketball and that hasn’t changed with Markus Howard leading the way, however, the Golden Eagles have really picked it up defensively this season as they rank 66th in scoring defense & 27th in defensive FG%. St. John’s has been outstanding on the offensive end of the court this year as they rank 26th in scoring offense, 50th in FG%, and 16th in 3P-FG% and although they can give up some points, they’ve been great causing turnovers as they rank 4th in turnover margin. This should be a good game, however, Marquette should have a huge advantage on the boards in this one and as they’ve are a bit more proven agianst solid competition with wins against Kansas State, Wisconsin, & Buffalo, I think Marquette does enough to win this pick-em.