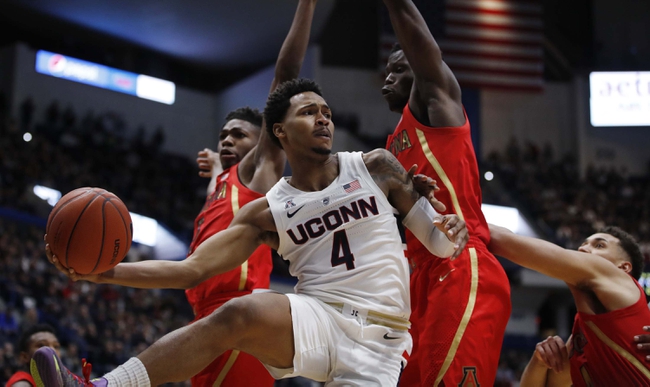 The UConn Huskies will travel to the Yuengling Center to take on the South Florida Bulls this Wednesday night in College Basketball action.

The UConn Huskies had their 2-game winning streak snapped and dropped to 9-4 on the season after being defeated by the Villanova Wildcats, 81-58, on December 22nd. UConn has no answers in the 2nd half for the Villanova offense and couldn’t fight back after a 19-0 Wildcats run gave Villanova a 54-36 lead with 10:39 left in regulation. UConn shot 40.7% from the field while allowing Villanova to shoot 57.4% from the field & 52.2% from beyond the arc in the loss. Leading the way for the Huskies was Christian Vital who had 18 points, 5 rebounds, and a steal.

Defensively, UConn is allowing their opponents to average 71.4 ppg on 43.4% shooting from the field. The Huskies have a rebound margin of 2.8 and a turnover margin of 3.0.

Defensively, South Florida is holding their opponents to average 64.3 ppg on 40.6% shooting from the field. The Bulls have a rebound margin of 9.5 and a turnover margin of 1.1.

UConn struggled offensively against Villanova, however, the Huskies have been solid on the offensive end this season as they come into this game ranked 53rd in scoring offense & 65th in FG%. South Florida hasn’t played the toughest of schedules so far this season, however, they did take Georgetown to OT earlier in the season and the Bulls have been solid on the defensive end as they currently rank 41st in scoring defense, 75th in defensive FG%, and 12th in rebound margin. South Florida is a much better team than what we saw last season, however, so is UConn, and as I think the UConn offense will be able to have some success against the South Florida defense, I’m taking UConn to cover this small road spread.