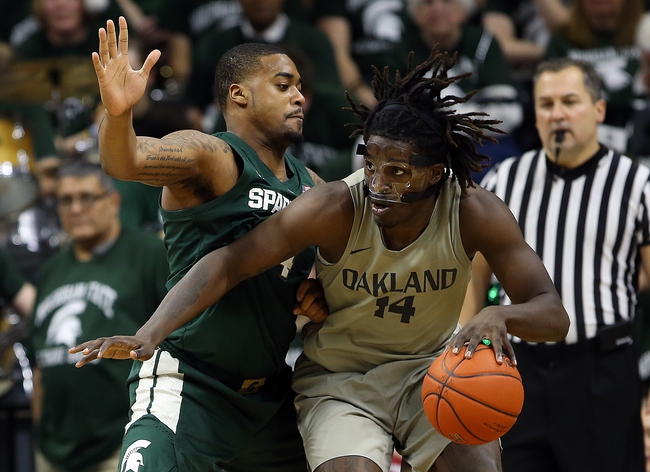 The Northern Kentucky Norse will travel to the Athletics Center O’rena to take on the Oakland Golden Grizzlies this Thursday night in College Basketball action.

The Northern Kentucky Norse won their 4th straight game and improved to 12-3 (2-0 Horizon) on the season after defeating the UIC Flames, 73-58, this past Sunday.  Northern Kentucky was outstanding defensively agianst the Flames and had little trouble picking up the victory after taking a 44-28 halftime lead. Northern Kentucky held UIC to 36.5% shooting from the field and outrebounded the Flames by a 46-27 margin in the victory. Leading the way for the Norse was Drew McDonald who had a double-double with 19 points, 20 rebounds, 2 assists, and a steal.

Defensively, Northern Kentucky is holding their opponents to an average of 65.5 ppg on 38.8% shooting from the field. The Norse have a rebound margin of 4.4 and a turnover margin of 1.6.

The Oakland Golden Grizzlies won their 2nd straight game and improved to 6-9 (2-0 Horizon) on the season after defeating the Youngstown State Penguins, 76-74, this past Sunday. Oakland allowed Youngstown State to fight back into the game and take a late lead after the Golden Grizzlies led 69-60 margin with 6:13 remaining, however, Oakland was able to escape with the victory after a Karmari Newman three-pointers gave Oakland the led for good with just :22 seconds left in regulation. Oakland shot 55.8% from the field & 50.0% from beyond the arc in the victory. Leading the way for the Golden Grizzlies was Brad Brechting who had 19 points, 5 rebounds, & 2 assists.

Defensively, Oakland is allowing their opponents to an average of 79.9 ppg on 50.2% shooting from the field. The Golden Grizzlies have a rebound margin of -5.7 and a turnover margin of 0.1.