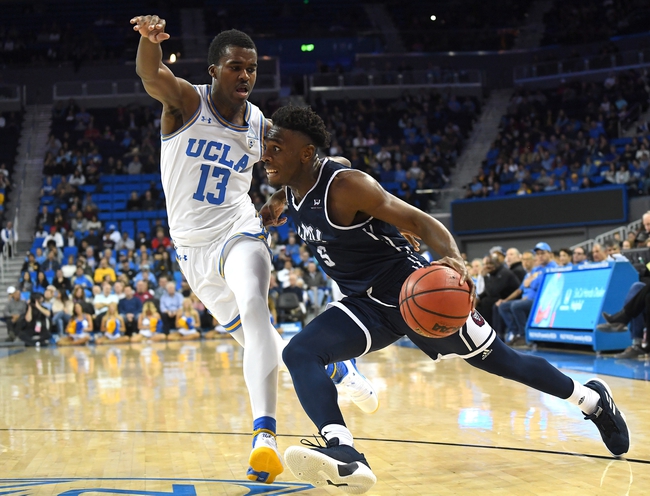 The Loyola Marymount Lions will travel to Firestone Fieldhouse to take on the Pepperdine Waves this Thursday night in College Basketball action.

The Loyola Marymount Lions improved to 12-2 on the season after defeating the UC Davis Aggies, 77-59, this past Friday night. Loyola Marymount dominated offensively agianst UC Davis and had little trouble securing the victory after taking a 41-23 halftime lead. Loyola Marymount shot 58.3% from the field and outrebounded the Aggies by a 29-24 margin in the victory. Leading the way for the Lions was Mattias Markusson who had 22 points, 2 rebounds, 1 assist, and a block.

Defensively, Loyola Marymount is holding their opponents to an average of 59.2 ppg on 39.6% shooting from the field. The Lions have a rebound margin of 6.5 and a turnover margin of 2.6.

The Pepperdine Waves snapped their 3-game losing streak and improved to 7-7 on the season after defeating the Alabama A&M Bulldogs, 100-64, this past Monday. Pepperdine had no trouble putting points up on the board agianst the Bulldogs and pulled away after a 12-0 Waves run to finish the 1st half gave Pepperdine a 50-24 halftime lead. Pepperdine shot 59.6% from the field & 51.7% from beyond the arc in the victory. Leading the way for the Waves was Jade’ Smith who had 19 points, 5 rebounds, 5 assists, 3 steals, and a block.

Defensively, Pepperdine is allowing their opponents to average 75.2 ppg on 45.3% shooting from the field. The Waves have a rebound margin of -5.1 and a turnover margin of 4.1.

Loyola Marymount has had a nice start to their season as although they got blown out by the UCLA Bruins, the Lions did secure solid victories over UNLV, Georgetown, Ohio, & Boise State. Loyola Marymount has been led by their defense this season as they come into this game ranked 10th in scoring defense & 48th in defensive FG%. Pepperdine is 5-1 at home this season and has an offense that ranks T-67th in scoring offense, however, the competition hasn’t been the toughest in their home games this season and the defense has struggled agianst better competition as they rank 256th in scoring defense & 270th in defensive FG%. I think Pepperdine will be able to hang around in this one for a while, however, Loyola Marymount is the better team and I think they’ll do enough to pull away and cover this small road spread. Take Loyola Marymount to cover.