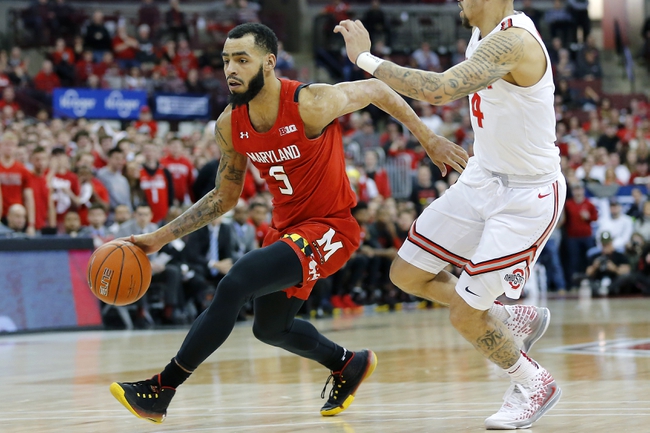 The Maryland Terrapins and the Minnesota Golden Gophers meet in Big Ten conference college basketball action from the Williams Arena on Wednesday night.

The Maryland Terrapins will look to create some distance at the top of the Big Ten standings, sitting at 12-4 in conference play despite a 79-72 loss to Ohio State last time out. Anthony Cowan Jr. leads the way in scoring with 16.4 PPG and 4.6 APG while Jalen Smith is 2nd in scoring and tops in rebounding by averaging a double-double per game with 15.1 PPG and 10.4 RPG this year and Aaron Wiggins is averaging 10.5 PPG this season. As a team, Maryland is averaging 71.7 points on 41.8% shooting from the field, 31.9% from 3-point range and 74.7% from the foul line while allowing 63 points on 38.8% shooting from the field and 31.5% from 3-point range this season. Maryland is 4-5 straight up and 4-4-1 against the spread on the road this season.

The Minnesota Golden Gophers will try to climb some ranks in the Big Ten standings with a big win after an 83-57 win over Northwestern last time out. Daniel Oturu leads Minnesota in scoring and rebounding by averaging a double-double per game with 19.7 PPG and 11.4 RPG while Marcus Carr is 2nd in scoring and the team leader in assists with 15.4 PPG and 6.7 APG while also averaging 5.8 RPG this season. Gabe Kalscheur is also averaging 11.5 PPG this season for the Gophers. As a team, Minnesota is averaging 69.8 points on 41.8% shooting from the field, 32% from 3-point range and 70.4% from the foul line while allowing opposing teams to average 65.6 points on 40.8% shooting from the field and 31.9% from 3-point range this season. Minnesota is 10-4 straight up and 9-5 against the spread at home this season.

I get why the free point would be tempting with Maryland here, as the Terrapins are a quality team and have performed fairly well on the road this season. However, we saw home court rear its head again when Maryland played Ohio State, and I was on the wrong side of that one and while the Terps could bounce back here, back-to-back road games are a tough spot and despite a couple of hiccups for the Gophers, Minnesota has still made Williams Arena a tough place to play, especially for conference foes. This game means a lot more to Minnesota for tournament positioning as Maryland has at least a game on everyone in 2nd place, so I’ll lay the point with Minnesota at home here.