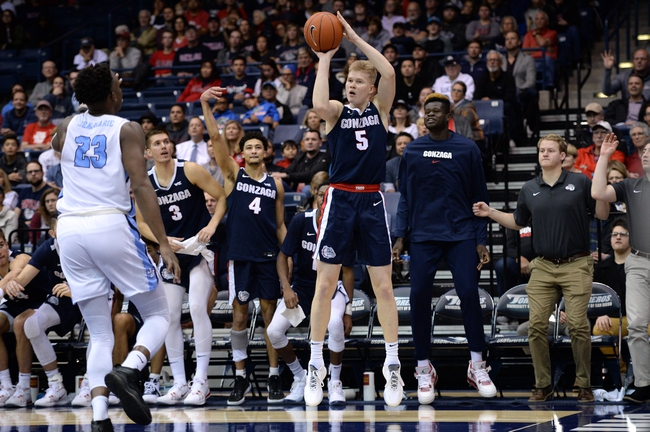 The San Diego Toreros and the Gonzaga Bulldogs meet in WCC college basketball action from the McCarthey Athletic Center on Thursday night.

The San Diego Toreros come into this game looking to avoid the basement of the WCC while trying to rebound from a three-game losing streak after a 92-63 loss to Saint Mary’s last time out pushed their conference mark to 2-12 this season. Braun Hartfield leads San Diego in scoring and rebounding with 14.6 PPG and 5.6 RPG while Joey Calcaterra has 11.3 PPG and Marlon Humphrey has 2.6 APG this season. As a team, San Diego is averaging 66.1 points on 41.7% shooting from the field, 31.3% from 3-point range and 65.1% from the foul line while allowing opposing teams to average 71.7 points on 44.6% shooting from the floor and 32.1% from 3-point range this season. San Diego is 3-9 straight up and 5-6-1 against the spread on the road this season.

The Gonzaga Bulldogs will look for a win to lock up the regular season championship here, sitting at 13-1 in conference play after a 91-78 loss to BYU last time out. Filip Petrusev leads Gonzaga in scoring and rebounding with 17.4 PPG and 7.8 RPG while Corey Kispert is 2nd in scoring with 14 PPG and Killian Tillie is right behind with 13.7 PPG. Admon Gilder, Joel Ayayi and Ryan Woolridge each have 10+ PPG this season with Woolridge adding a team-high 4.4 APG this year. As a team, Gonzaga is averaging 87.6 points on 51.2% shooting from the field, 38.5% from 3-point range and 68.5% from the foul line while allowing opposing teams to average 67.6 points on 41.8% shooting from the field and 31.8% from 3-point range this season. Gonzaga is 15-0 straight up and 9-6 against the spread at home this season.

This is an absolute ton of points to give up, and with the amount of success the underdog’s had in this matchup, they could be worth a look with the Toreros. However, Gonzaga has a history of beating up and demolishing the Toreros, including a 94-50 beatdown at San Diego at the beginning of conference play. The two other teams that are near Gonzaga’s level in the conference, St. Mary’s and BYU, San Diego has played both on the road lately and lost by 29 and 23 points respectively. I just think this game screams blowout, so I’ll lay the points with Gonzaga at home here.