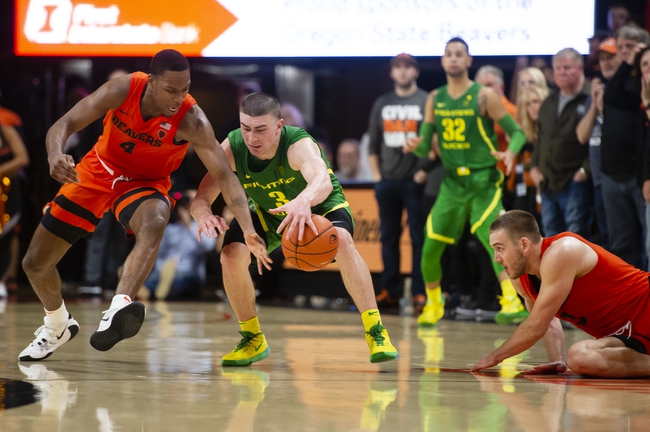 The Oregon State Beavers will try to climb a rank or two in the Pac-12 standings, sitting at 5-10 in conference play after a 3rd straight loss in the form of a 74-73 loss to Arizona State last time out. Tres Tinkle leads Oregon State in scoring and rebounding with 18.2 PPG and 7 RPG while Ethan Thompson is 2nd in scoring and tops in assists with 15.1 PPG and 4.4 APG this season. Kylor Kelley also has 10.9 PPg and 5.1 RPG this season. As a team, Oregon State is averaging 71.9 points on 45.9% shooting from the field, 31.7% from 3-point range and 74.8% from the free throw line while allowing 68.1 points on 43.1% shooting from the field and 34.2% from 3-point range this season. Oregon State is 3-7 straight up and 4-6 against the spread on the road this season.

The Oregon Ducks will look to keep pace atop the Pac-12 standings, sitting in a three-way tie for 2nd at 10-5 in conference play after a 73-72 win over Arizona last time out. Payton Pritchard leads the Ducks in scoring and assists with 20.1 PPG and 5.5 APG while Chris Duarte is 2nd in scoring with 12.9 PPG and Will Richardson has 10.7 PPG this season. Shakur Juiston also has 8 PPG and a team-high 6.4 RPG this season. As a team, Oregon is averaging 75.5 points on 46.5% shooting from the field, 38% from 3-point range and 69.5% from the foul line while allowing opposing teams to average 67.6 points on 40.6% shooting from the field and 32.5% from 3-point range this season. Oregon is 14-0 straight up and 9-5 against the spread at home this season.

Normally, in a rivalry game, you can throw numbers like these out the window as the two sides just want to beat each other as badly as possible. However, Oregon is still on pace to challenge for the regular season championship in the last week of the regular season, while Oregon State has been one of the Pac-12’s bigger disappointments once again this season. The Beavers did beat the Ducks by 10 in Corvallis not too long ago, but I expect the Ducks to exact revenge in a big way here, winning and covering the spread in the process.