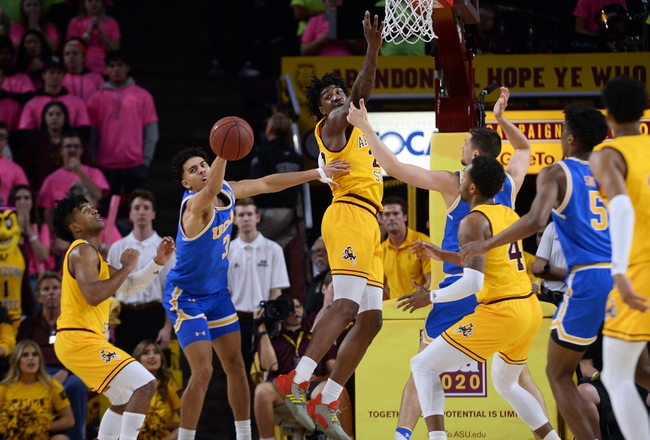 The Arizona State Sun Devils and the UCLA Bruins meet in college basketball action from Pauley Pavilion on Thursday.

Arizona State enters this game at 19-8 this year. The Sun Devils are on a seven-game win streak, taking out Washington, UCLA, USC, Stanford, Cal, Oregon and Oregon State in that time.

In the win over the Beavers, Arizona State’s Remy Martin and Alonzo Verge each scored 17 points, combining for five assists and four rebounds. Romeo White had a nice game there as well with 15 points, seven rebounds and one assist.

Over on the UCLA side, they’re 17-11 this year. In the last five games, UCLA is undefeated, beating Arizona, Washington State, Washington, Utah and Colorado in succession.
In the win over Colorado, UCLA’s Cody Riley led the team on 16 points with two rebounds and one assist. Tyger Campbell doubled up there with 15 points, 11 assists and two rebounds, and Chris Smith chipped in 14 points and seven boards.

It’s been a nice run for Arizona State over the last seven games. A few of the finishes have been close (like 74-73 versus Oregon State) but Arizona State has been scoring well and they’ve been very good at finishing off games.

As for UCLA, they haven’t been as electric on the scoreboard but they’ve kept solid control of games lately and have taken out some tough customers. This should be a pretty great matchup; I’m going with Arizona State to eke one out.