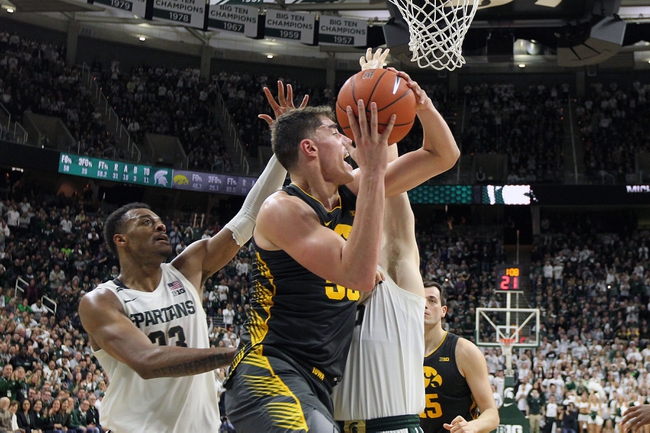 The Penn State Nittany Lions will try to keep pace near the top of the Big Ten standings, sitting at 11-6 in conference play after a 65-64 win over Rutgers last time out. Lamar Stevens leads Penn State in scoring with 17.6 PPG while Myreon Jones is 2nd in scoring with 14.1 PPG. Mike Watkins has 9.8 PPG and 7.7 RPG while Jamari Wheeler is averaging a team-high 3.1 APG this season. As a team, Penn State is averaging 75.7 points on 44.1% shooting from the field, 32.8% from 3-point range and 69% from the foul line while allowing opposing teams to average 67.1 points on 40.4% shooting from the field and 31.9% from 3-point range this season. Penn State is 5-4 straight up and 5-4 against the spread on the road this season.

The Iowa Hawkeyes will try to join the fray near the top of the conference table, sitting at 10-7 in conference play after a 78-70 loss to Michigan State last time out. Luka Garza leads the Hawkeyes in scoring and rebounding with 23.6 PPG and 9.6 RPG while Joe Wieskamp is 2nd in scoring with 14.5 PPG and CJ Fredrick has 10.7 PPG this season. Connor McCaffery leads Iowa in assists with 3.9 APG this season. As a team, Iowa is averaging 78.2 points on 45.3% shooting from the field, 34.5% from 3-point range and 73.9% from the foul line while allowing opposing teams to average 43.3% shooting from the field and 32.2% from 3-point range this season. Iowa is 13-1 straight up and 10-2-2 against the spread at home this season.

Head-to-head, the home team is 4-1-2 ATS in the last 7 meetings between these two teams.

I’ve gone back and for on this game as this is one of the tougher games to call in the early part of Saturday’s card. However, while Penn State’s been one of the few Big Ten teams to have sustained success on the road in conference play, the Nittany Lions have had issues covering the number as of late. I’ve said before that home dominance has been the theme in the Big Ten this year, and Iowa has been a big part of that, going 6-0-2 ATS in their 8 conference home games this season, and a lot of those games haven’t been close, including a 20-point beatdown of Maryland who is leading the Big Ten right now. Iowa at home is not something I’m looking to step in front of right now, so I’ll lay the points with the Hawkeyes at home in this one.