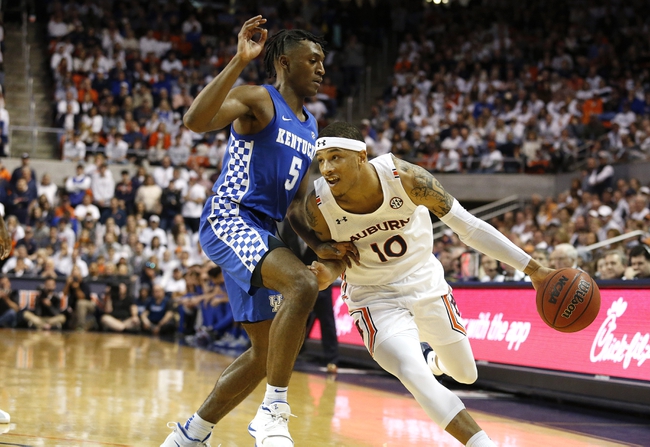 The Auburn Tigers and the Kentucky Wildcats meet in college basketball action from Rupp Arena on Saturday.

Auburn enters this one at 24-4 on the year. After dropping consecutive games to Missouri and Georgia, Auburn has won their last pair of outings over Tennessee and Ole Miss.

In the win over Mississippi, Auburn’s top scorer was Austin Wiley with 15 points and 11 rebounds. Samir Doughty was also in double-digits there with 14 points, four assists and three reboudns, and Isaac Okoro had 10 points with one assist.

Over on the Kentucky side, they’re 23-5 this season. Kentucky is currently on a seven-game winning streak, taking out Mississippi State, Tennessee, Vanderbilt, Mississippi, LSU, Florida and Texas A&M.

In the win over Texas A&M, Kentucky’s lead scorer was Immanuel Quickly with 30 points, five rebounds and two assists. Tyrese Maxey put up 13 points with five rebounds and three assists there, and Ashton Hagans had 11 points, seven assists and four rebounds.

Auburn didn’t score lights-out in the Mississippi game, but they got the job done with a nine-point win. Still, it’s out of the ordinary to see Auburn finish with fewer than 70 points, just like they have in two of the last three games.

As for Kentucky, they haven’t been overwhelming on the scoreboard either but they beat Florida by six and Texas A&M by nine. The last time these teams met up was a 75-66 home win for Auburn, and I think things will go differently this time. I’m going Kentucky; I think they'll be able to get some revenge.