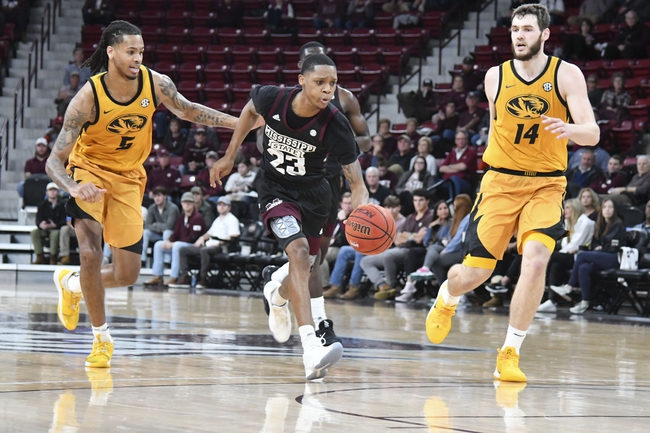 The Mississippi State Bulldogs and the Missouri Tigers meet in SEC college hoops action from the Mizzou Arena on Saturday afternoon.

The Missouri Tigers will try to climb into the middle of the pack in the SEC standings, sitting at 6-9 in conference play after a 61-52 win over Vanderbilt last time out. Dru Smith leads the Tigers in scoring and assists with 12.5 PPG and 3.9 APG while Xavier Pinson is 2nd in scoring with 10.7 PPG and Mark Smith has 10.6 PPG this season. Mitchell Smith leads Mizzou in rebounding with 5 RPG this season. As a team, Missouri is averaging 67.2 points on 41.3% shooting from the field, 30.4% from 3-point range and 77.5% from the foul line while allowing opposing teams to average 65.3 points on 40.6% shooting from the field and 29% from 3-point range this season. Missouri is 11-3 straight up and 9-5 against the spread at home this season.

Part of me considered Mississippi State as they’re the better team record-wise and I haven’t been as concerned with Mississippi State scoring as I have been Missouri, but the Bulldogs on the road have been iffy at best and surprisingly enough, Missouri has won 4 straight and 5 of their last 6 home games and are 5-2 SU at home in conference play this season. Missouri is just one of those teams that does their best work at home and in a pick ‘em, I’ll take my chances with Missouri on home soil here.