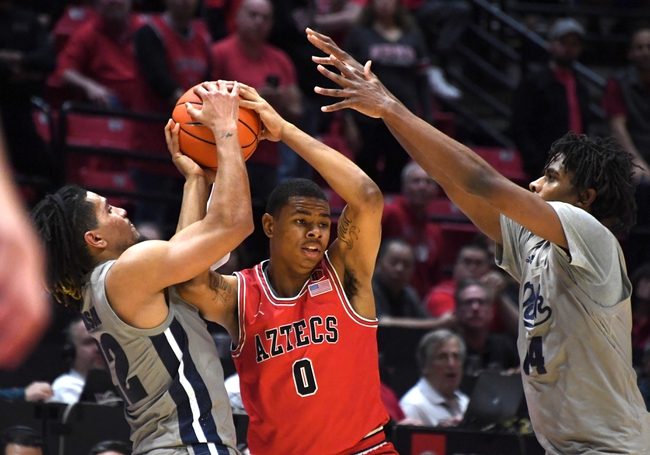 The San Diego State Aztecs will try to finish the season strong after improving to 16-1 in conference play after a 66-60 win over Colorado State last time out. Malachi Flynn leads the Aztecs in scoring and assists with 16.9 PPG and 5.1 APG while Matt Mitchell is 2nd in scoring with 12.5 PPG and Yanni Wetzell is 3rd in scoring and tops in rebounding with 11.7 PPG and 6.5 RPG this season. Jordan Schakel is also chipping in 10.1 PPG for the Aztecs this season. As a team, San Diego State is averaging 75.1 points on 46.9% shooting from the field, 38% from 3-point range and 75.7% from the foul line while allowing opposing teams to average just 58.6 points on 37.9% shooting from the field and 28.2% from 3-point range this season. San Diego State is 10-0 straight up and 9-1 against the spread on the road this season.

The Nevada Wolf Pack will try to stand alone as the #2 seed in the Mountain West, sitting at 12-5 in conference play after a 6th straight win in the form of a 73-68 win over Wyoming last time out. Jalen Harris leads the Wolf Pack in scoring with an average of 21.8 PPG while Jazz Johnson is 2nd in scoring with 16 PPG and Lindsey Drew has 11.1 PPG with team-highs of 6.7 RPG and 4.2 APG this season. As a team, Nevada is averaging 77.4 points on 44.9% shooting from the field, 38.2% from 3-point range and 74.8% from the foul line while allowing opposing teams to average 71.9 points on 40% shooting from the field and 29.1% from 3-point range this season. Nevada is 12-2 straight up and 8-6 against the spread at home this season.

I understand San Diego State being favored on the road, as the Aztecs are 10-0 straight up and 9-1 ATS, and San Diego State has been beating teams up away from home in conference play. However, the Aztecs are locked into the top spot in the conference, and while a loss could damage their case for a #1 seed in the NCAA tournament, the fact is that the Aztecs are going to the dance, and they’re going to be a high seed. Nevada still has a ton to play for, as a win would not only strengthen their case to the tournament committee, but it could earn the Wolf Pack the #2 seed in the conference tournament and set up an easier path to the conference championship game. Plus it’s the last home game of the season, so you’d have to think that Nevada will be throwing everything at the Aztecs here. I’ll take my shot with Nevada and the points in a game the Wolf Pack could win outright.