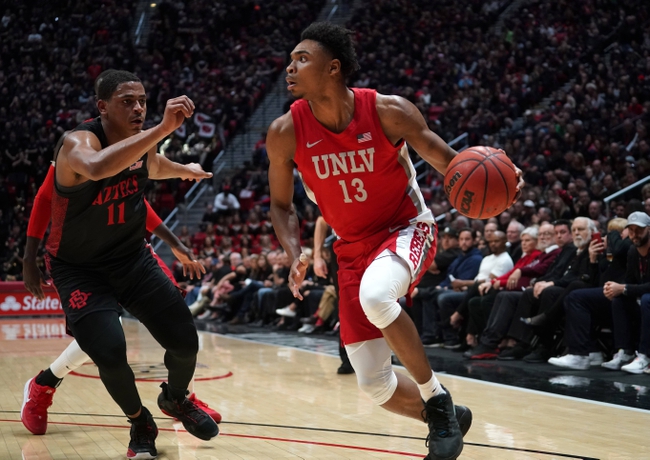 The UNLV Rebels will try to climb into the top-3 in the Mountain West standings, sitting at 11-6 in conference play after a four-game winning streak following a 76-66 triumph over Boise State last time out. Bryce Hamilton leads UNLV in scoring with 15.7 PPG as well as 5.6 RPG while Amauri Hardy has 14.5 PPG and 3.2 APG. Elijah Mitrou-Long has 12.2 PPG and 3.3 APG while Donnie Tillman has 10.1 PPG this season. Cheikh Mbacke Diong has 7.6 PPG and a team-high 7.9 RPG this season as well for the Rebels. As a team, UNLV is averaging 71.8 points on 43.2% shooting from the field, 31.3% from 3-point range and 69.8% from the foul line while allowing opposing teams to average 70.2 points on 42.3% shooting from the field and 33.9% from 3-point range this season. UNLV is 4-7 straight up and 5-6 against the spread on the road this season.

The San Jose State Spartans will just be looking to finish the season on a high note, sitting at 3-14 in conference play after an 8th straight loss in the form of a 94-56 loss to Utah State last time out. Seneca Knight leads San Jose State in scoring and rebounding with 16.8 PPG and 5.7 RPG while Richard Washington is 2nd in scoring with 10.4 PPG and Brae Ivey has a team-high 2.5 APG as well as 8.9 PPG this season. As a team, San Jose State is averaging 70.1 points on 38.8% shooting from the field, 30% from 3-point range and 71.9% from the foul line while allowing opposing teams to average 81.1 points on 47.3% shooting from the field and 35.5% from 3-point range this season. San Jose State is 6-9 straight up and 7-7 against the spread at home this season.

Head-to-head, the underdog is 5-1 ATS in the last 6 meetings between these two teams.

Normally I’d think this might be too many points to be laying on the road with senior day at San Jose State. However, the Spartans haven’t put up much resistance against anyone lately to make me think that they’d rise to the occasion here, and like it or not, UNLV has been playing some of the better ball in the conference over the last couple of weeks to play themselves into one of the higher seeds in the conference tournament. I just think this is another game where San Jose State is overmatched, so I’ll lay the points with UNLV here.