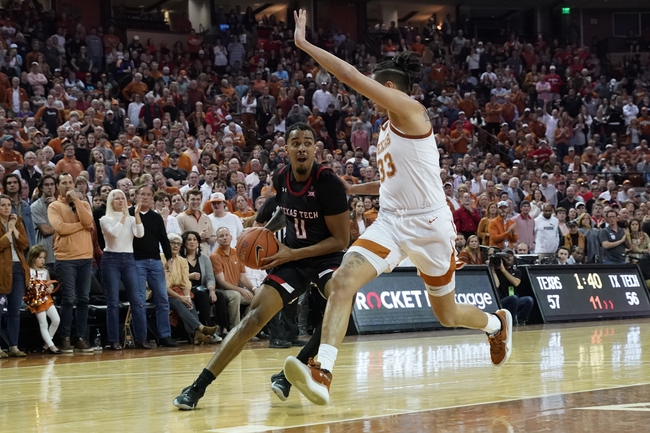 The Texas Longhorns will try to escape the logjam in the middle of the Big 12 standings, sitting in a three-way tie for 4th at 7-8 in conference play after a 3rd straight win in the form of a 67-57 triumph over West Virginia last time out. Matt Coleman III leads Texas in scoring and assists with 12.5 PPG and 3.7 APG while Courtney Ramey is 2nd in scoring with 11.4 PPG and Andrew Jones is right behind with 11.3 PPG. Jericho Sims leads the Longhorns on the glass with 8.2 RPG while also averaging 9.7 PPG this season. As a team, Texas is averaging 64.6 points on 43.1% shooting from the field, 33.9% from 3-point range and 67.5% from the foul line while allowing opposing teams to average 63.3 points on 42.2% shooting from the field and 32.3% from 3-point range this season. Texas is 4-5 straight up and 5-4 against the spread on the road this season.

The Texas Tech Red Raiders will try to hold serve near the top of the Big 12 standings, firmly in 3rd place at 9-6 in conference play after a 65-51 loss to Oklahoma last time out. Jahmi’us Ramsey leads Texas Tech in scoring with 15.6 PPG while Davide Moretti has 13 PPG and Kyler Edwards has 12.1 PPG. Terrence Shannon Jr. has 10.1 PPG while Chris Clarke has team-high averages of 6.6 RPG and 4.8 APG this season. As a team, Texas Tech is averaging 72.9 points on 45.5% shooting from the field, 36% from 3-point range and 75.4% from the foul line while allowing opposing teams to average 63 points on 40.5% shooting from the floor and 30% from 3-point range this season. Texas Tech is 13-2 straight up and 7-8 against the spread at home this season.

It feels weird saying this with a Texas team that’s ranked and 9-6 in conference play coming into this one, but I’m not sure what to make of the Red Raiders right now. Texas Tech has played well and shown flashes of the team that made it to the national championship last year, but then go out and almost forget how to play basketball against Oklahoma. The Longhorns have been in my bad books for a while now and I’m waiting for the other shoe to drop on Shaka Smart, but like it or not, the Longhorns are playing pretty decent ball right now, covering in 6 of their last 9 and are actually on the bubble in the tournament watch right now. I think a win here would be massive for Texas’ tournament resume, and while I’m not sure the Longhorns get it, I definitely think the Longhorns keep it within the number so I’ll take Texas and the points here.