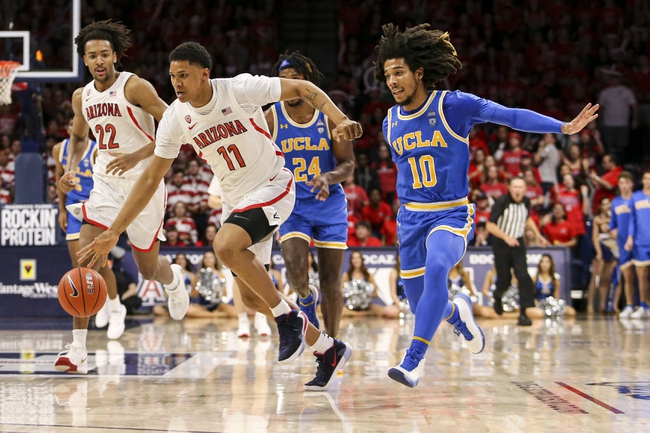 The Arizona Wildcats and the UCLA Bruins meet in college basketball action from Pauley Pavilion on Saturday.

Arizona enters this one at 19-9 on the year. After winning three straight over California, Stanford and Oregon State, Arizona has lost consecutive games to Oregon and USC.

In the loss to USC, Arizona’s Zeke Nnaji led the team with 15 points and 10 rebounds. The only other Arizona player in double-figures there was Nico Mannion with 11 points, two rebounds and two assists; the next closest was Ira Lee’s six points.

Over on the UCLA side, they’re 18-11 this year. It’s been a six-game winning streak for UCLA in their last half-dozen, and they’ve taken out Arizona, Washington State, Washington, Utah, Colorado and Arizona State in that time.

In the win over the Sun Devils, UCLA’s Jake Kyman led the team on 21 points with six rebounds. Jalen Hill and Jaime Jaquez each scored 13 with a combined 13 rebounds there, and Tyger Campbell doubled up on 10 points, 14 assists and five boards.

Arizona nearly pulled off a nice upset over Oregon, falling 73-72 at home in a tough loss. The hangover might still have been there in the USC game, as Arizona scored just 48 points there in a nine-point defeat. It goes to show how erratic Arizona has been as far as points totals lately.

UCLA took a 65-52 road victory over Arizona the last time these teams met up back on February 8. I expect the total here to be somewhat higher, but the home edge should help out UCLA sufficiently to bang out a cover.