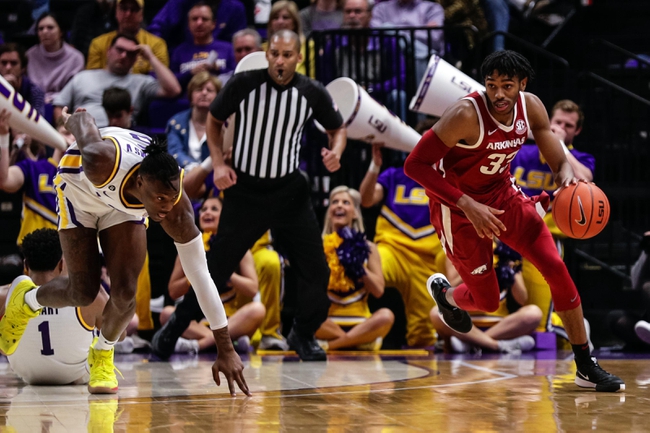 The LSU Tigers and the Arkansas Razorbacks meet in college basketball action from Bud Walton Arena on Wednesday.

LSU enters this matchup at 20-9 so far. In the last five games, LSU is just 2-3, with losses to Alabama, Kentucky and Florida alongside wins over South Carolina and Texas A&M otherwise.

Over on the Arkansas side, they’re 18-11 this year. After winning consecutive games over Missouri and Tennessee, Arkansas feel in their last outing to Georgia on Saturday.

In the loss to Georgia, Arkansas’ lead scorers were Isaiah Joe and Mason Jones, each with 26 points, three rebounds and a combined six assists between the two players. Desi Sills had a nice outing there as well with 21 points and six boards for Arkansas.

The good news for LSU is that they’re 2-1 in their last three games, and they hung around pretty well with Kentucky in a 79-76 home loss. The bad news is that LSU has scored 66 or fewer points in each of their last two games, which follows what had been a nice offensive run dating back to January.

As for Arkansas, they’ve scored well over their last four games, but outside of that they’ve been letting some of the better teams get away from them lately and just haven’t finished competitively. That said, with a good home push here Arkansas should do pretty well. I’m still going with LSU on the cover, though.