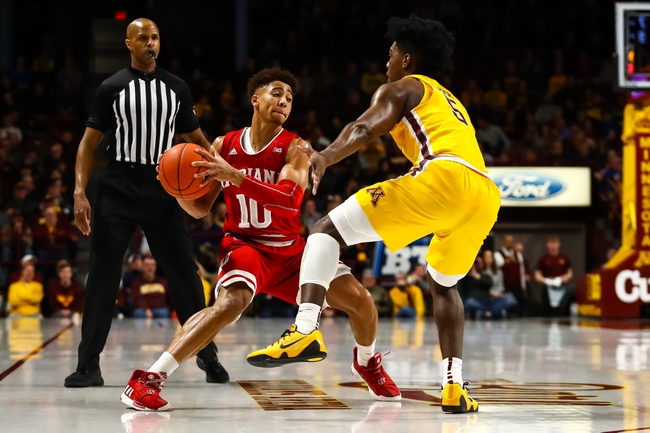 The Minnesota Golden Gophers and the Indiana Hoosiers meet in Big Ten conference college basketball action from the Assembly Hall on Wednesday night.

The Minnesota Golden Gophers will try to make some moves in the last couple games of the regular season, sitting at 7-11 in conference play after a 71-69 loss to Wisconsin last time out. Daniel Oturu leads the Gophers with 20.2 PPG and 11.4 RPG while Marcus Carr is 2nd in scoring and tops in assists with 15.7 PPG and 6.6 APG. Gabe Kalscheur also has 11.2 PPG for the Golden Gophers this season. As a team, Minnesota is averaging 69.9 points on 42% shooting from the field, 32% from 3-point range and 69.4% from the foul line while allowing opposing teams to average 66.1 points on 40.6% shooting from the field and 31.4% from 3-point range this season. Minnesota is 2-9 straight up and 5-6 against the spread on the road this season.

The Indiana Hoosiers are in the same boat, trying to climb ranks in the Big Ten conference down the stretch, sitting at 9-9 in Big Ten conference play after a 67-66 loss to Illinois last time out. Trayce Jackson-Davis leads Indiana in scoring and rebounding with 13.7 PPG and 8.1 RPG while Devonte Green has 10.7 PPG and Justin Smith has 10.5 PPG and 5.4 RPG this season. Rob Phinisee is dishing out a team-high 3.1 APG this season. As a team, Indiana is averaging 71.3 points on 44.3% shooting from the field, 32.4% from 3-point range and 68.5% from the foul line while allowing opposing teams to average 67 points on 42.1% shooting from the field and 31.9% from 3-point range this season. Indiana is 14-3 straight up and 10-7 against the spread at home this season.

Head-to-head, the underdog is 15-5 ATS in the last 20 meetings between these two teams.

I get why the points with Minnesota would be tempting as Indiana hasn’t been great lately and the underdog’s had a ton of success over the years between these two teams. However, I’ve said before and I’ll say it again, home dominance has been the theme in Big Ten play this season, and Indiana has been a huge part of that as the Hoosiers by far play their best ball at home. Minnesota has the size to give the Hoosiers trouble, but ultimately, I think home court is the edge that separates the two, so I’ll lay the bucket with Indiana at home here.