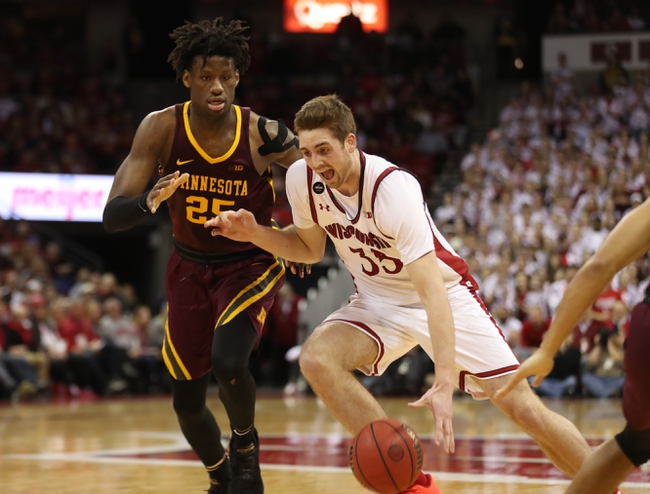 The Northwestern Wildcats and the Wisconsin Badgers meet in Big Ten conference college basketball action from the Kohl Center on Wednesday night.

The Northwestern Wildcats will be out to break free from the basement of the Big Ten, sitting at 2-16 in conference play after an 81-76 win over Nebraska last time out. Miller Kopp leads Northwestern in scoring with 13.3 PPG while Boo Buie has 10.7 PPG and Pat Spencer has 10.6 PPG and 3.8 APG this season. Pete Nance has 8.1 PPG and a team-high 6.1 RPG while Ryan Young has 9 PPG and 6 RPG this season. As a team, Northwestern is averaging 65.3 points on 41.8% shooting from the field, 30.9% from 3-point range and 73% from the foul line while allowing opposing teams to average 70.2 points on 42.6% shooting from the field and 33.8% from 3-point range this season. Northwestern is 2-9 straight up and 7-4 against the spread on the road this season.

The Wisconsin Badgers will look to keep their spot in the top four of the Big Ten standings, sitting at 12-6 in conference play after a 6th straight win in the form of a 71-69 win over Minnesota last time out. Nate Reuvers leads the Badgers in scoring and rebounding with 13 PPG and 4.4 RPG while D’Mitrik Trice is 2nd in scoring and tops in assists with 10.1 PPG and 4.2 APG this season. Micah Potter and Brad Davison each have 9.9 PPG for Wisconsin this season. As a team, Wisconsin is averaging 67.6 points on 42.7% shooting from the field, 35.1% from 3-point range and 76.6% from the foul line while allowing opposing teams to average 62.9 points on 41.6% from the field and 33.3% from 3-point range this season. Wisconsin is 14-1 straight up and 7-6-2 against the spread at home this season.

Head-to-head, the road team is 8-3-1 ATS in the last 12 meetings between these two teams.

I’ve gone back and forth on this game as this is a lot of points. However, while Wisconsin is easily the better team, the Badgers have their eyes on one of the top four spots in the Big Ten to try for the double bye. The Badgers also haven’t been blowing teams away, as the Badgers only beat Minnesota and Purdue by two and four points respectively, and those two are two of the below average teams in the Big Ten this year in terms of competing on the road. I’ve ragged on Northwestern a ton, but the Wildcats have done well against the number on the road and I just think this game ends up being closer than the line would suggest, so I’ll take a shot at Northwestern and the points in this one.