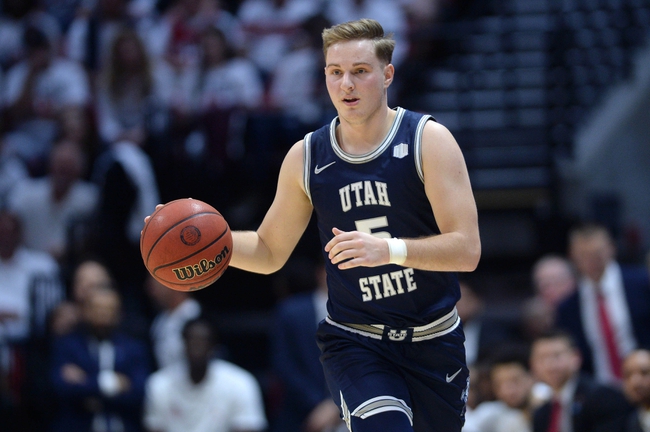 The New Mexico Lobos and the Utah State Aggies meet in a Mountain West conference tournament quarterfinal matchup from the Thomas & Mack Center on Thursday night.

The New Mexico Lobos punched their ticket to the quarterfinals by earning a 79-66 win over San Jose State in the first round. JaQuan Lyle leads the Lobos in scoring and assists with 15 PPG and 4.7 APG while Corey Manigauit has 12.1 PPG and Vance Jackson has 10.6 PPG with both Manigault and Jackson logging 4.8 RPG. Zane Martin also has 10.5 PPG for the Lobos this season. As a team, New Mexico is averaging 76.8 points on 47% shooting from the field, 33.1% from 3-point range and 71.6% from the foul line while allowing opposing teams to average 75.5 points on 45% shooting from the field and 35.1% from 3-point range this season.

The Utah State Aggies come into the conference tournament as the #2-seed, finishing the year with a 12-6 overall record, winning out on a three-team tiebreaker for the 2nd spot. Sam Merrill leads Utah State in scoring and assists with 18.8 PPG and 4 APG while Neemias Queta has 12.7 PPG in 19 games and Justin Bean has 12.3 PPG and a team-high 10.3 RPG this season. As a team, Utah State is averaging 76.7 points on 45.6% shooting from the field, 33.2% from 3-point range and 77.3% from the foul line while allowing opposing teams to average 63.6 points on 39.3% from the field and 31.1% from 3-point range this season.

I get why the points with New Mexico would be tempting as the Lobos have an ability to put up points in a hurry when they want to, but the concern I have is that the Lobos defense has more holes in it than a block of swiss cheese. Instead of trying to pick a side, my more confident play is on the total, and I like the over here. I can easily see Utah State scoring in the 80s and maybe even low 90s, and I can still see New Mexico scoring in the Mid 60s or low 70s. Either way, I expected to see this total i the 150s when it came out, so for it to be as low as it is here, I'll take the over in this one.