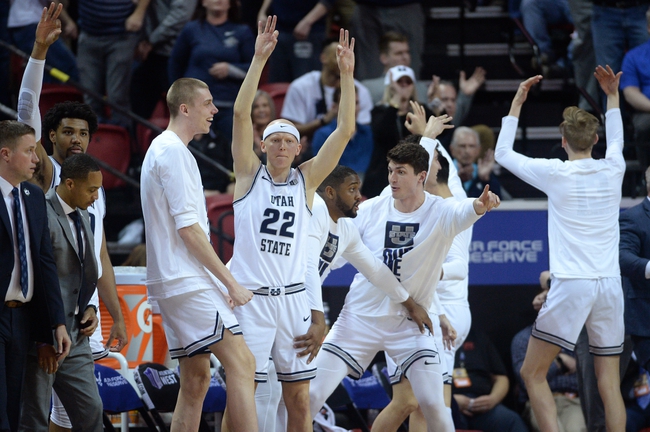 The Wyoming Cowboys and the Utah State Aggies meet in college basketball action from Thomas & Mack Center on Friday.

Coming into this Mountain West Tournament matchup, Wyoming sits at 9-23 overall. After consecutive losses going into the tourney, Wyoming bagged a win over Colorado State Wednesday and another over Nevada on Thursday.
In the Thursday tournament win over Nevada, Wyoming fell behind 43-33 at halftime. Things looked pretty bleak until a late-half surge by the Cowboys and they were able to snatch the lead. Wyoming held off the Wolf Pack and emerged victorious 74-71 in an epic game.
Over on the Utah State side, they’re 24-8 overall. After breaking a six-game win streak with a loss to New Mexico just before tournament time, Utah State got revenge over the Lobos on Thursday 75-70 to move on.

Utah State was flummoxed by a pretty good New Mexico team last weekend, but the Aggies were able to hold them off on Thursday when it really mattered. It was a good return to scoring form for Utah State, who has now put up 70 or more points in six of their last seven outings, going 6-1 in that time.

As for Wyoming, they’ve been seriously feisty over their last two games, totaling 154 points combined. It’s a great look at the team’s potential. I don’t think Utah State will lose here, but I like the momentum pick in Wyoming. Stranger things have happened.