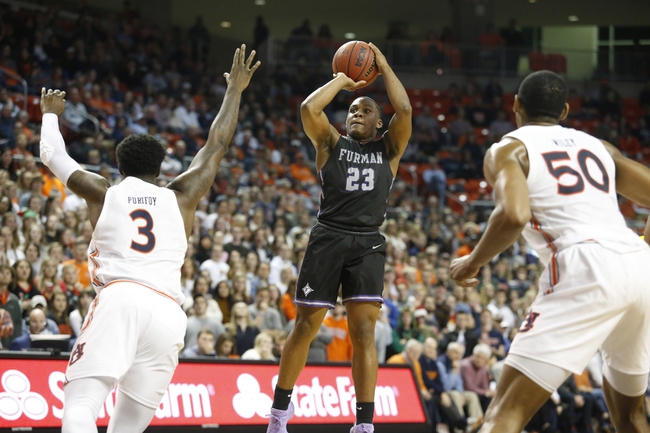 The Wofford Terriers and the Furman Paladins meet in a SoCon tournament quarterfinal matchup in college basketball action from the U.S. Cellular Center on Saturday evening.

The Wofford Terriers punched their ticket to the quarterfinals by virtue of a 93-76 win over the Citadel in their first-round matchup on Friday. Nathan Hoover leads Wofford in scoring with 15.4 PPG while Storm Murphy has 11.7 PPG and 3.4 APG and Chevez Goodwin is 3rd in scoring and tops in rebounding with an average of 11.5 PPG and 6.2 RPG this season. As a team, Wofford is averaging 71.7 points on 45.8% shooting from the field, 34.6% from 3-point range and 71.6% from the foul line while allowing opposing teams to average 68.2 points on 43.9% from the field and 33% from 3-point range this season.

The Furman Paladins come into the conference tournament as the #2 seed, finishing the year with a 15-3 mark in conference play as part of their 25-6 overall record this season. Jordan Lyons leads Furman in scoring with 16.4 PPG while Noah Gurley has 14.5 PPG and Clay Mounce has 13.2 PPG and a team-high 6.2 RPG this season. Mike Bothwell has 10.6 PPG and Alex Hunter is averaging 9 PPG and a team-high 3.6 APG this year. As a team, Furman is averaging 77.1 points on 47.6% shooting from the field, 35.4% from 3-point range and 69.9% from the foul line while allowing opposing teams to average 66 points on 43.6% shooting from the field and 30.6% from 3-point range this season.

Wofford comes into this game as the more rested of the two sides, but rest can sometimes translate to rust after certain teams have had time to get a game under their belts, and we've seen it in conference tournaments already with the likes of Wyoming making a run to the Mountain West semis as a last placed #11 seed. Wofford either covered or won outright in both meetings this season and I don't think that changes here as we have another close call on our hands. I'll take Wofford and the points here.