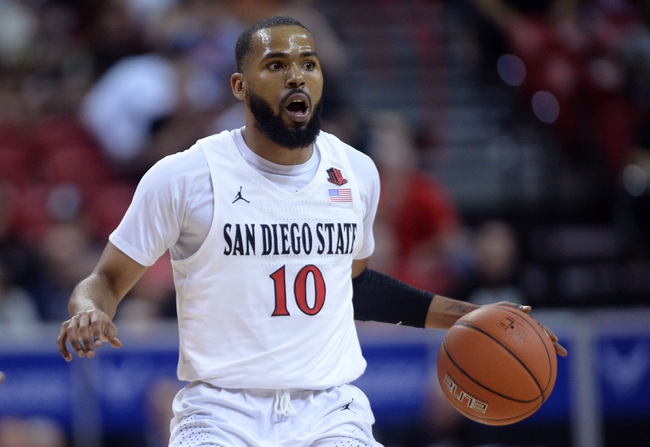 The Mountain West college basketball tournament championship is on the line when the Utah State Aggies take on the San Diego State Aztecs from the Thomas & Mack Center on Saturday.

The Utah State Aggies booked their spot in the conference championship game after a hard-fought 89-82 win over Wyoming in the semi-finals. Sam Merrill leads Utah State in scoring and assists with 19.4 PPG and 4 APG while Neemias Queta has 12.9 PPG and 7.8 RPG and Justin Bean is averaging a double-double per game with 12.7 PPG to go along with his team-leading 10.4 RPG this season. As a team, Utah State is averaging 76.7 points on 45.6% shooting from the field, 33.2% from 3-point range and 77.3% from the foul line while allowing opposing teams to average 63.6 points on 39.3% shooting from the field and 31.1% from 3-point land this season.

The San Diego State Aztecs reached the championship game after an 81-68 win over Boise State on Friday in their semi-final matchup. Malachi Flynn leads San Diego State in scoring and assists with 17.7 PPG and 5.2 APG while Matt Mitchell has 12.5 PPG and Yanni Wetzell has 11.5 PPG and a team-high 6.3 RPG this season. Jordan Schakel also has 10.3 PPG for the Aztecs this season. As a team, San Diego State is averaging 75.3 points on 47.1% shooting from the field, 38% from 3-point range and 76.4% from the foul line while allowing opposing teams to average 59.2 points on 38.3% shooting from the field and 28.8% from behind the arc this season.

I've gone back and forth on this game, but at the end of the day, San Diego State would like to win the Mountain West, but the Aztecs are going to remain a #1 seed or maybe slip to #2 with a loss, but the Aztecs are in. Utah State has to win to guarantee their spot at the big dance otherwise the Aggies are going to be sitting on the bubble on pins and needles for a week until Selection Sunday rolls around. Ultimately I think Utah State throws everything they have at the Aztecs here and gives San Diego State a battle. I'll take a shot with Utah State and the points here.