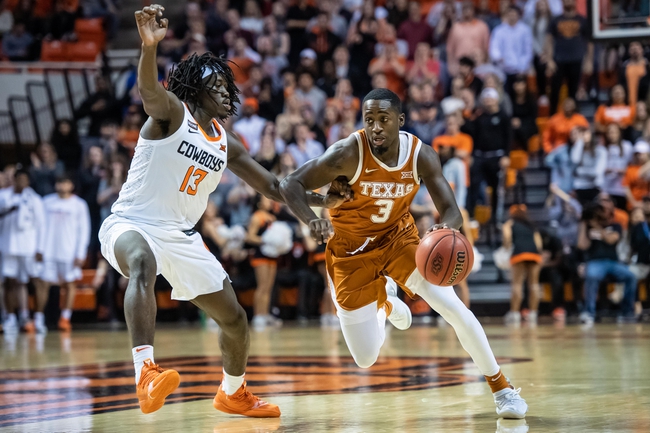 The Oklahoma State Cowboys and the Texas Longhorns meet in college basketball action from Frank Erwin Center on Saturday.

Oklahoma State enters this game at 15-14 so far. In their last four games, Oklahoma State is 3-1 with a loss to Kansas alongside wins over Oklahoma, Iowa State and Kansas State otherwise.

In the win over Kansas State, Oklahoma State’s lead scorer was Cameron McGriff with 14 points, five rebounds and one assist. Thomas Dziagwa added 11 points and two boards there, and Isaac Likekele had 10 rebounds, five assists and nine points.

Over on the Texas side, they’re 19-11 this year. It’s been a five-game win streak for Texas over their last quintet, as they’ve taken out TCU, Kansas State, West Virginia, Texas Tech and Oklahoma in that time.

In the win over Oklahoma, Texas’ only double-digit scorer was Matt Coleman with 21 points, three rebounds and two assists. Both Brock Cunningham and Royce Hamm added 11 rebounds with eight points and one assist each for Texas in that one as well.

Since fumbling to a 47-point finish in a blowout loss to West Virginia, Oklahoma State has been playing better, with 69 or more points scored in three of four games. The lone outlier there was an 83-58 road loss to Kansas, and let’s be realistic: OK State wasn’t going to get close there.

In any case, Texas hasn’t exactly been lighting up the scoreboard themselves—they’ve been at 68 or below in each of their last three—but they’ve put up enough defensive effort to cruise in a lot of their recent games. I like Texas to keep it going here and cover.