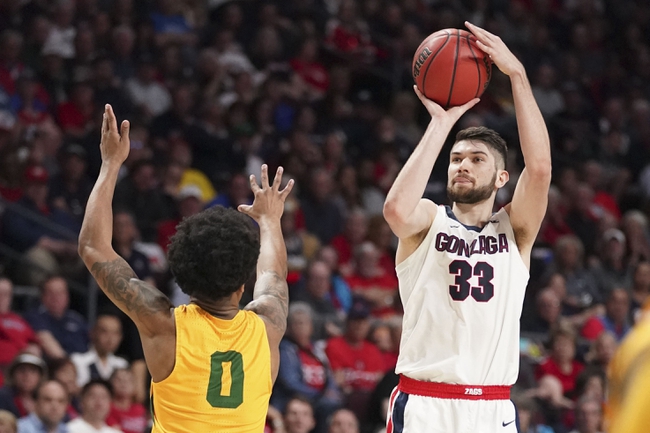 The Saint Mary’s Gaels and the Gonzaga Bulldogs meet in the West Coast Conference championship game in college basketball action from the Orleans Arena on Tuesday night.

The Saint Mary’s Gaels punched their ticket to the title game with a 51-50 win over BYU in the semifinals on Monday. Jordan Ford leads the Gaels in scoring with 21.8 PPG while Malik Fitts is 2nd in scoring with 16.7 PPG as well as leading the Gaels in rebounding with 7 RPG this season. Tanner Krebs has 9.7 PPG while Tommy Kuhse has a team-high 3.8 APG this season. As a team, Saint Mary’s is averaging 75.9 points on 48.3% shooting from the field, 40.2% from 3-point range and 75.4% from the foul line while allowing opposing teams to average 66.5 points on 45.2% shooting from the field and 33% from 3-point range this season.

The Gonzaga Bulldogs reached the conference championship game as the top seed after an 81-77 win over San Francisco last time out. Filip Petrusev leads the way with 17.8 PPG and 7.8 RPG while Corey Kispert is 2nd with 14.3 PPG and Killian Tillie has 13.6 PPG in 22 games this season. Admon Gilder, Joel Ayayi and Ryan Woolridge each have 10+ PPG this season, with Woolridge leading the ‘Zags in assists with 4.5 APG this season. As a team, Gonzaga is averaging 87.7 points on 51.5% shooting from the field, 39% from 3-point range and 68.7% from the foul line while allowing opposing teams to average 67.6 points on 41.9% shooting from the field and 31.8% from 3-point range this season.

St. Mary's holding BYU to 50 points was impressive, and the girls maybe riding some momentum coming into this one after that last second shot to win the game against the Cougars, but 51 points isn't going to cut it against Gonzaga, and even last nights performance aside, we've seen St Mary's fold in the past against Gonzaga. The zags failed to really pull away against San Francisco, but Gonzaga is just the better team and has had the upper hand on St. Mary's for some time now. I just don't see any way this doesn't end in a decisive double-digit win for Gonzaga, so I'll lay the points with the Zags in this one.