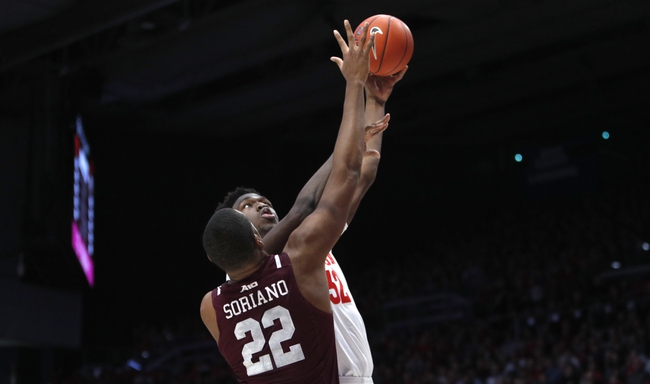 The George Washington Colonials and the Fordham Rams meet in an A-10 conference tournament first round matchup in college basketball action from Barclays Center on Wednesday afternoon.

The Fordham Rams come into the tournament as the #14-seed, finishing dead last in the conference standings, sitting at 2-16 in conference play after losing out on a tiebreaker to Saint Joseph’s. Antwon Portley leads Fordham in scoring with 10.4 PPG while Jalen Cobb has 10.2 PPG with both Cobb and Portley each logging 2.3 APG this season. Joel Soriano also has 6.4 RPG for the Rams this season. As a team, Fordham is averaging 58.1 points on 38% shooting from the field, 31.7% from 3-point range and 65.7% from the foul line this season.

The George Washington Colonials come into the conference tournament as the #11-seed, finishing the year with a 6-12 conference record as part of their 12-19 overall mark, losing out the #10-seed in a tiebreaker with La Salle. Armel Potter leads the Colonials in scoring and assists with 14.3 PPG and 5.9 APG while Jamison Battle is 2nd in scoring and tops in rebounding with 11.9 PPG and 5.3 RPG. Maceo Jack has 11.8 PPG and Jameer Nelson Jr. has 10.4 PPG for GW this season.

I get George Washington being favored as the higher seed. However, we’ve seen it multiple times in other conference tournaments that the seeding in the opening round games hasn’t mattered a ton, and there’s been a lot more parity than what we’ve been used to in years past when the upsets weren’t as frequent. Fordham hasn’t been very good, like at all, during conference play, but the 2-16 mark, guess who those two wins came against? The George Washington Colonials. Not just one, but both of them. I think this is another game where we see an early round upset, and while common logic may suggest that GW exacts some sort of revenge here, I haven’t seen it happen in the regular season to this it would happen in the conference tournament. I’ll take the free bucket with Fordham here.