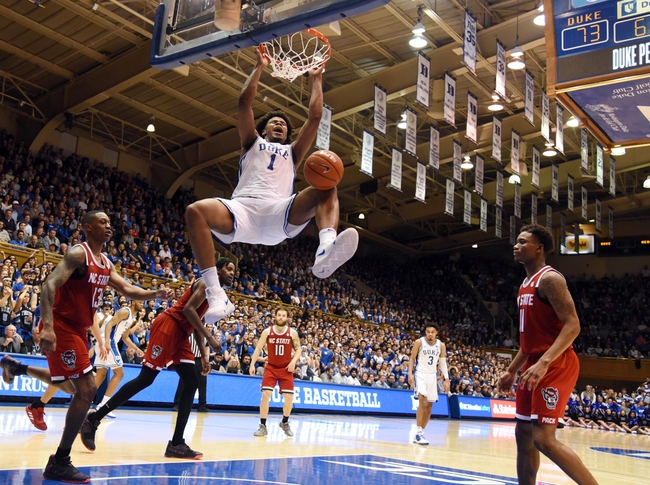 The Duke Blue Devils and the NC State Wolfpack meet in college basketball action from Greensboro Coliseum on Thursday.

Coming into this ACC Tournament matchup, NC State is 20-12 overall. After beating Wake Forest in their final pre-tournament game, NC State managed to take out Pittsburgh in the opener on Wednesday 73-58.

In the Wednesday tourney win over Pittsburgh, NC State’s Devon Daniels led the way on 23 points, six rebounds and one assist. CJ Bryce posted a double-double there on 13 points, 10 rebounds and three assists, and Markell Johnson chipped in 11 assists with seven points and four boards.

Over on the Duke side, they’re sitting at 25-6 this season. Since losing consecutive games to Wake Forest and Virginia, Duke has won their last pair over North Carolina State and North Carolina.

In the win over North Carolina, Duke’s top scorer was Vernon Carey with 25 points and 10 rebounds. Tre Jones had a great line there on 21 points, 11 assists and three boards, and Cassius Stanley chipped in with 19 points, six rebounds and one assist for the Blue Devils.

Duke and NC State have played each other twice since February 19, and by score the results are eerily similar. NC State powered out an 88-66 win in their home game, and then Duke got revenge with an 88-69 home win of their own on March 2. Duke has now scored a combined 177 points across their last two outings and seem to be back in gear.

That said, NC State has been playing quite well also, with 73 or more points scored in three of their last four. Thinking about this one, it’s hard to trust Duke as much as usual right now because they’re normally so dominant and haven’t been as sharp in ACC play. Still, I feel like Duke is the better cover option in what should be a really fun game to watch.