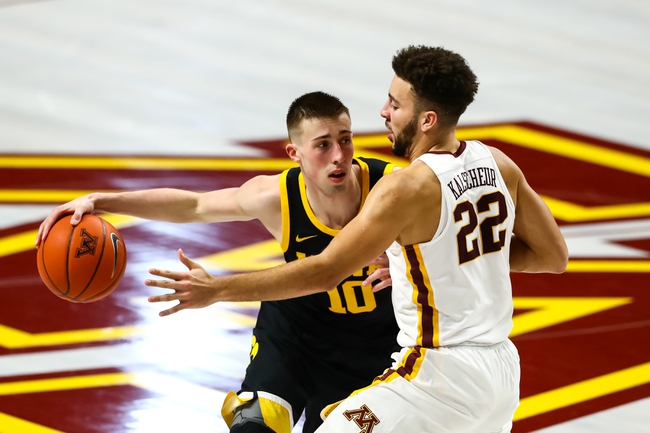 The Minnesota Golden Gophers and the Iowa Hawkeyes meet in a Big Ten tournament second round matchup in college basketball action from Bankers Life Fieldhouse on Thursday afternoon.

The Minnesota Golden Gophers come into this one after picking up a 74-57 win over Northwestern in their first round matchup on Wednesday. Daniel Oturu leads the Gophers in scoring and rebounding with an average of 20 PPG and 11.4 RPG while Marcus Carr is 2nd in scoring with 15.5 PPG and a team-high 6.7 APG this season. Gabe Kalscheur has 11.8 PPG as well this season. As a team, Minnesota is averaging 71 points on 42.6% shooting from the field, 33.2% from 3-point range and 68.8% from the foul line while allowing opposing teams to average 66.6 points on 40.8% shooting from the field and 30.8% from behind the arc this season.

The Iowa Hawkeyes come into the conference tournament as the 5th seed, finishing the year with an 11-9 mark in conference play winning out on a four-team tiebreaker for the highest seed. Luka Garza leads the Hawkeyes in soring and rebounding with 23.9 PPG and 9.8 RPG while Joe Wieskamp has 14 PPG and CJ Fredrick has 10.2 PPG this season. Connor McCaffery also has a team-high 4 APG for Iowa this season. As a team, Iowa is averaging 77.7 points on 45.1% shooting from the field, 34.7% from 3-point range and 75% from the foul line while allowing opposing teams to average 72.3 points on 43% shooting from the field and 32.1% form 3-point range this season.

Head-to-head, the favorite is 4-1 ATS in the last 5 meetings between these two teams.

A lot of these earlier round matchups in other tournaments have seen the lower seed give the higher seed a run. However, Iowa took both meetings between the two teams this season, and side-by-side I think the Hawkeyes are just the better team. The line being this low kind of sketches me out a little bit, but with the way Iowa poured it on to finish the year, I think the Hawkeyes and the low line has to be the play here.