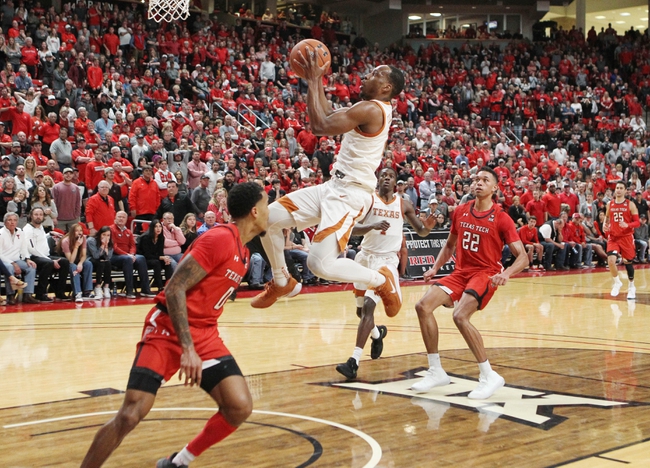 The Texas Longhorns and the Texas Tech Red Raiders meet in a Big 12 conference tournament quarterfinal matchup in college basketball action from the Sprint Center on Thursday afternoon.

The Texas Longhorns enter the conference tournament as the #4-seed, finishing the year with a 9-9 record in conference play, sitting in a logjam in the top half of the Big 12 standings but winning out on a tiebreaker for 4th. Matt Coleman III leads the Longhorns in scoring and assists with 12.7 PPG and 3.4 APG while Andrew Jones has 11.5 PPG and Courtney Ramey has 10.9 PPG as well as 2.9 APG this season. Jericho Sims also has 9.7 PPG and a team-high 8.2 RPG this season. As a team, Texas is averaging 64.2 points on 42.8% shooting from the field, 33.4% from 3-point range and 68.5% from the foul line while allowing opposing teams to average 63.3 points on 42.4% shooting from the field and 32.2% from 3-point range this season.

The Texas Tech Red Raiders enter the tournament as the 5th seed, also finishing with a 9-9 conference record this year as part of the Red Raiders’ 18-13 overall mark. Jahmi’us Ramsey leads the Red Raiders in scoring with 15 PPG while Davide Moretti has 13 PPG and Kyler Edwards has 11.4 PPG this season. Chris Clarke also has team-high averages of 6.6 RPG and 4.6 APG this season. As a team, Texas Tech is averaging 71.9 points on 45.2% shooting from the field, 35.5% from 3-point range and 75.4% from the foul line while allowing opposing teams to average 63.5 points on 40.7% shooting from the field and 30.9% from 3-point range this season.

Head-to-head, the underdog is 6-2 ATS in the last 8 meetings between these two teams.

I considered Texas Tech laying the points, but the fact here for me is that Texas, as much as I was on their case this season, really stepped up their play down the stretch and to be honest, I’m one of many people that doesn’t feel good about betting against Shaka Smart in March. Texas Tech is a solid team, but Texas can hang like we saw this season as Texas either won outright as 11.5-point dogs or lost by just 5 points in Lubbock. I’ll take the points with the Longhorns in a game that Texas could win outright.