Who had the Most Wins as a Head Coach in College Basketball History? 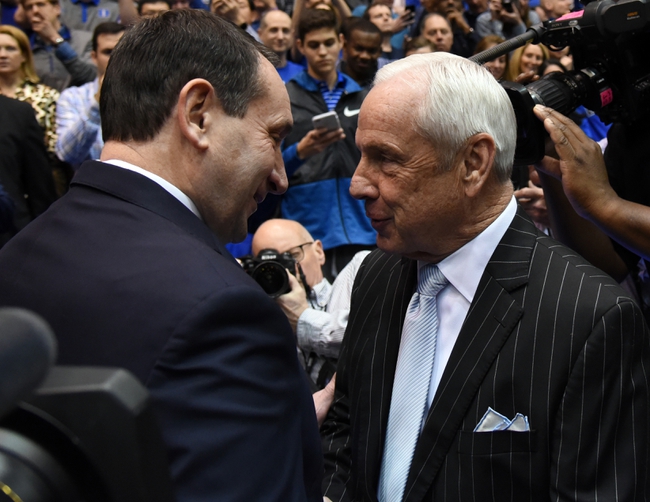 Most Wins by a Head Coach in NCAA D1 College Basketball

Let’s take a look at the ten coaches who have the most wins of all-time in college basketball.

Although Jim Boeheim did have 101 wins vacated due to violations, he has still won 1065 games for his Syracuse Orange. Boeheim has led his Orange to 5 Final Fours and 1 National Championship (2003). Any time Syracuse makes the NCAA Tourney under Boeheim, they are a dangerous team to play against, no matter the seed.

Bob Knight is one of the most well-remembered coaches in college basketball history. His unorthodox style of coaching was successful for many years, which included three National Championships (1976, 1981, 1987 - All with Indiana). Knight called it quits with coaching in the middle of 2007-08 season, where his son, Pat Knight, took over.

Most likely after the 2020 season, Roy Williams will pass Bob Knight for the 3rd spot on this list. Coach Williams has been one of the most winningest coaches of all time, with a .778 lifetime win percentage. Williams has won three National Championships (2005, 2009, 2017 - All with UNC). Williams, Coach K, and Boeheim make the modern-day ACC a coaches Hall-of-Fame in itself.

Jim Calhoun was a pioneer for college basketball head coaches to come. Calhoun had great success with a Northeastern school that does not have the recruiting luxury of other high-profile schools. Of course, Calhoun is most remembered for his time with UConn, in which he won three National Championships and reached 4 Final Fours.

Mr. Kentucky, Adolph Rupp coached his Wildcats for 41 seasons from 1930-31 to 1971-72. Rupp was one of the first coaches that showed how imperative his position was to the sport and the NCAA. There is no wonder why Kentucky plays its home games at Rupp Arena, as Adolph will forever mean a lot for Kentucky basketball. Rupp won four National Championships (48’, 49’, 51’, 58’), and he will forever be one of the greats.

Bob Huggins is still coaching for West Virginia as of now. Unfortunately, at the moment, Huggins is one of the greatest and most winningest head coaches without an NCAA Championship title. Huggins’ last trip to the final four was in 2009-10 with WVU. He has coached in six different conferences and has made a great career for himself.

Sutton coached from 1969 - 2008 for five different schools in his extremely impressive career. Despite not winning a National Championship, Sutton did make it to two Final Fours, both with Oklahoma State (his longest endeavor)

Lefty Driesell may have not made it to any Final Fours or National Championships, but he was certainly a players’ coach. Driesell loved taking on tall challenges in his many endeavors throughout the NCAA D1 College hoops realm. He coached from 1960 until 2002 for four different schools in five different conferences.

The pick in this article is the opinion of the writer, not a Sports Chat Place site consensus.
Previous Pick
Texas Rangers 2020 Season Preview, Picks, Odds and Predictions
Next Pick
Which College Basketball Players Scored the Most Points?