Which College Basketball Players Made the Most 3-Pointers? 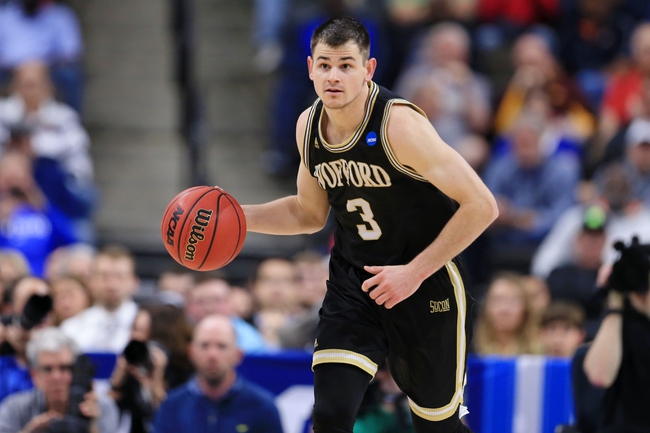 Three-point field goals were officially introduced to the NCAA in the 1986-87 season, and immediately ushered college basketball into the high-flying modern age. A competent three-point shooter can help teams keep strong opponents at bay, or erase huge deficits in a hurry. The most consistent long-range players can utilize the three-pointer to help bring great success to their college basketball teams, and as a fan it’s simply fun to watch. Get Free College Basketball Picks and College Basketball Predictions for every game all season long at Sports Chat Place.

These are the Division I college basketball players with the most career three-point field goals.

1. Fletcher Magee, Wofford, 509 (2015-19) - Magee leads D-I college basketball with 509 career three-pointers made. He got right to work with Wofford, scoring 13.8 PPG as a freshman and leading the Southern Conference in three-point shooting percentage. Magee could have bagged several more, but he went 0-for-12 from behind the three-point line in his final college game as Wofford fell to Kentucky in the 2019 NCAA Tournament.

2. Travis Bader, Oakland, 504 (2010-14) - Bader held the college basketball three-point record for a few years, and it sounds strange to consider that his only Division I scholarship offer came from Oakland. He jumped right in during his freshman year, starting 22 of 35 games and shooting 44 percent from three-point range. Bader was undrafted in the NBA but spent some time in the Development League before going overseas to play professionally.

3. JJ Redick, Duke, 457 (2002-06) - Redick was a key figure on a high-profile Duke team during his college basketball tenure. He racked up myriad awards during his time as a Blue Devil, including a consensus national college player of the year, two ACC Player of the Year nods, and had his number (4) retired by Duke. Redick went on to an NBA career in 2006 after being drafted by the Magic with the 11th overall pick.

4. David Holston, Chicago State, 450 (2005-09) - Interestingly enough, Holston was a walk-on with the Chicago State Basketball team, and didn’t get a ton of national attention due to the school not having a conference affiliation. His 5 ft 8 in stature didn’t garner any interest from NBA teams and he went undrafted, but he did move on to play in Europe. Holston was the Pro A MVP (France) in 2019.

5. Chris Clemons, Campbell, 444 (2015-19) - With 18.5 PPG as a freshman, Clemons was immediately an impact player for Campbell. As a sophomore in the Big South Tournament, he broke a tournament scoring record with 51 points in a game and averaged 25.1 PPG that year. Although Clemons went undrafted in the NBA, he was able to join up with the Rockets as a two-way player.

6. Keydren Clark, Saint Peter’s, 435 (2002-06) - Clark’s college basketball numbers are no joke. He scored 3,058 points and averaged 25.9 PPG with Saint Peter’s and for a short time he held the record for the most three-point shots made in NCAA history. After his college days, Clark went on to play professionally in Greece, France and Turkey.

7. Markus Howard, Marquette, 434 (2016-20) - In addition to being a prolific three-point scorer, Howard racked up some pretty impressive basketball numbers with Marquette. He was a consensus first-team All-American, a Big East Player of the Year and the NCAA season scoring leader in 2020. Howard also managed a gold medal in the FIBA U17 World Cup with the US National Team in 2016.

8. Damon Lynn, NJIT, 434 (2013-17) - Lynn put NJIT on the map in their NCAA Division I era. He became the school’s all-time leading D-I scorer in late 2016 and was First-team All-Atlantic Sun that same year. Following his college career, Lynn played with NBL Canada, a Lithuanian pro team and the NBA G League Texas Legends.

9. Tyler Hall, Montana State, 431 (2015-19) - Like many of the other names on this career college basketball three-pointers list, Hall started out with a solid freshman season, averaging 18.6 PPG. He was Big Sky Freshman of the Year that season, and ended up getting elected to to First-team All-Big Sky squads. When Hall was finished with his college career, he held the Big Sky Conference record with 2,518 career points.

9. Chris Lofton, Tennessee, 431 (2004-08) - We’ll finish off our three-way tie at the bottom of the list with Lofton, who made third team All-America in his freshman year at Tennessee. He was Kentucky Mr. Basketball in 2004, then went on to three first-team All-SEC nods. Following his college career, Lofton went on to play professional ball for several different teams across America, Europe and Asia.